(Were I on a “best of” list, it would likely be for Most Egregious Overuse of Quotation Marks and Hyphens. And Parenthesis.)

MY FAVORITE BOOKS WITHOUT PICTURES
I enjoyed Malcolm Gladwell’s The Tipping Point, about the viral nature of social phenomenon, and his book Blink, about the virtues and dangers of instinctive thinking. Both books are quick reads and are constructed around compelling premises – I heartily recommend you check them out.

Suburban Nation, by Andres Duany, Elizabeth Plater-Zyberk and Jeff Speck is a fascinating and infuriating survey of modern civic planning, or lack thereof. You’ll never look at a cul-de-sac the same way. It probably shouldn’t be in this category because it has pictures, now that I think about it. I like pictures. 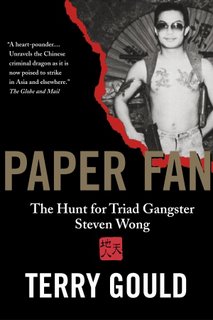 Paper Fan, by Terry Gould, is the true story of a Canadian investigative reporter’s search for a fugitive Triad boss who fakes his own death. Hunting a crimelord who doesn't want to be found is only a slightly better idea than frolicking with Mr. Chocolate. A gritty, compelling look at the Triad underworld and the societies that enable them to exist, Paper Fan reads like an Elmore Leonard novel, full of colorful rogues and snappy prose.
MY FAVORITE BOOKS WITH PICTURES
I really dug Brubaker and Phillips’ Sleeper, which ended this year. The finale of the series is collected in a trade paperback called The Long Way Home. This is one of those series that I didn’t want to end for selfish reasons, but it’s a story that demands an ending and is all the more satisfying because it does stop.

I’m also one of those blog geeks that loved Grant Morrison and Frank Quitely’s All-Star Superman, which seemed fresh and – forgive me – full of wonder. But holy shit does Superman have a huge neck in this comic! It was a little distracting.

What else? I enjoyed We3, Seven Soldiers, The Bulleteer (boobs!), and Alan Moore and Gene Ha’s The Forty-Niners. That Gene Ha can draw buildings like a mofo. I also liked Villains United, Wonder Woman, She Hulk, The Goon, and Brubaker's Captain America.
One of my favorite new finds this year was Colonia, by Jeff Nicholson, a charming historical/fantasy adventure which is worthy of a post all its own. Loved it.
MY FAVORITE MOVIE ABOUT A GUY WHO GETS KILLED AND DEVOURED BY BEARS
This is an easy one. 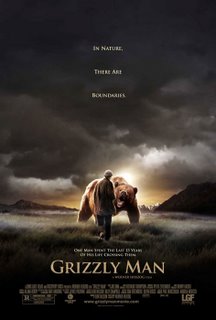 Werner Herzog’s Grizzly Man tells the story of Timothy Treadwell, a man with a misguided, fatal love for grizzly bears. Treadwell spent his summers among the grizzly bears in Alaska – until they ate him and his girlfriend. Using footage shot by Treadwell himself with Herzog narrating and pontificating, Grizzly Man is a solemn exploration of madness and our relationship to nature, red in tooth and claw. Herzog has some experience with madman and quixotic quests and is a bit of a superfreak himself, so the film is a perfect pairing of subject and chronicler. After seeing Grizzly Man, you will never again frolick with giant bears in alpine meadows, speaking to them in baby voices and giving them cute nicknames. Because Mr. Chocolate will totally fucking eat you.
MY FAVORITE MOVIES THAT AREN’T ABOUT A GUY WHO GETS KILLED AND DEVOURED BY BEARS

Those little penguins in March of the Penguins were hella cute and the cinematography was incredible, so that gets a thumbs up from me. I thought Batman Begins was keen. Come on, you know it was the best Batman movie, admit it.
Let's see, what else? I enjoyed the carnage of War of the Worlds and all the quipping and Whedon Fu of Serenity, even if Wash did go out Hawkeye-style. Kung Fu Hustle? Brilliant. The Aviator was swell, particularly Cate Blanchett’s spot-on performance as Katherine Hepburn. Guilty pleasures include Sky High, Stealth, Mr. & Mrs. Smith, and Sin City. I am a shameless genre whore and make no apology. 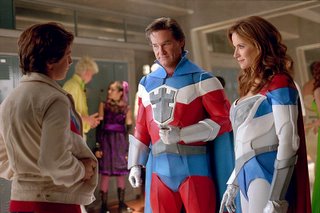 On DVD this year I enjoyed David Mamet’s Spartan, with Val Kilmer in full-on cryptic bad-ass mode. I know, it came out in 2004, but I didn’t see it until 2005. Same with House of Flying Daggers and Spirited Away – they were new to me. I saw Ong Bak this year and nearly had a religious experience. If you like the fu, you must check it out.

SOME OF MY FAVORITE BLOGS

All my favorite blogs are over there to the right. See them? They all get the big Dave’s Long Box thumbs-up. It’s difficult to single out particular blogs, but if I must:

Beaucoupkevin: Jesus, what a smart-ass. Kevin Church rocks out with his sock out on this acerbic and funny comics blog, home of Otter Prime and the Shit That Is Killing Comics feature, in which Kevin picks over the offerings in Previews like a big, sarcastic vulture. That can type.

The Absorbascon: Scipio Garling cranks out posts like the Queen Alien pops out eggs. The prolific Mr. Garling sticks it to the DC Universe with wry posts analyzing the hierarchy of henchmen and the allure of Vibe, meng. Scipio is also the co-ruler of the Big Monkey Comics empire and has the second coolest name of all bloggers. Sorry, I think Johnny Bacardi is the coolest name.

Neilalien: Holy shit! It’s a motherfucking palindrome! Nelialien is Lord of the Linkbloggers and Devoted Disciple of Dr. Strange. He seeks out cool stuff so I don’t have to. A classic blog.

Comics Should Be Good: This blog has my favorite regular feature, Comic Book Urban Legends Revealed! The title says it all; Brian Cronin plays mythbuster with the shadowy tales that float around the comics world.

Chris’s Invincible Super-Blog: Chris Sims is funny as hell. I wouldn’t pick him up if he was hitchhiking, but he’s funny as hell. Just stay on the other side of the computer, Chris.

Comic Book Galaxy: “Pushing comics up your bum since 2000.” I swear, that’s their motto. Okay, it’s not really a blog, it’s an online magazine run by Alan David Doane, the grand auteur of online comic criticism. With articles and columns by smart people, Comic Book Galaxy has a mission and you had best get the hell out of the way. Good stuff.

Brill Building: Ian Brill lands great interviews and writes insightful essays about comics. Plus, he is a kick-boxing champion who defeated a French savate master in The Kumite. ‘Nuff said.

The Savage Critic(s): Brian Hibbs’ round-up of recent comics, and online roost of Graeme MacMillan of the late Fanboy Rampage. I like to read their reviews of shitty comics so I can still feel like I know what’s going on without actually buying every damn book...
Polite Dissent: Dr. Scott reviews comics for medical accuracy, and he likes musicals. What's not to like?
Comic Bloggers' Poll 2005: Crikey, I almost forgot! Go here and vote for YOUR favorite comic book stuff of 2005.
Forgive me if I haven't mentioned your blog. I briefly toyed with the idea of writing a little blurb about every single blog on my links list and why I like them, but that is the Road to Insanity, and I shall not take it, my friends.
MY FAVORITE DEAD CHARACTER ACTOR 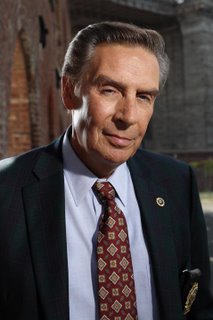 If you liked Kung Fu Hustle, seek out God of Cookery, which is Stephen Chow's best film. It ends with a martial-arts cooking battle that's like Iron Chef, but it's a million times more insane.

The film's kind of hard to find nowadays, but it's totally worth it.

Thanks very much for the link and the kind words, Dave!

I'm glad that I'm not the only one who forgot to pimp Comic Blogger's Poll until just now!!

If I have my copy of God Of Cookery handy, I can lend it to you, Campbell.

Thank you very much for the shout-out (although I try to keep The Kumite thing under wraps). Your blog was one of my favorites this year.

I think The Aviator also came out in 2004 but fuck it, it was good enough to be listed this year.

I miss Sleeper too. Holden was so great as the damaged male role. And Miss Misery- nothing like a redhead femme fatale.
I don't think any of your blog favs were by women. Not stumping for my blog, but girls are not smelly!

Thanks for the good words, Mr. Dave. You and I need to have a supervillain team-up and destroy the comics internet, someday. You know you want to.

Jerry Orbach: Best. Animated. Candlestick. Ever. (And I don't even like that movie!)

"And then Mr. Chocolate totally fucking ate him" should be on the poster right underneath the last little tag line there.

And seek out Shaolin Soccer, but only if you can land an uncut import version. From what I understand, Miramax "improved" the film for U.S. release by cutting about 20 minutes from a 100-minute movie. Then I'm sure they looked confused when people said they still didn't like it.

2) The current DVD for Shaolin Soccer has both the Chinese (112 minutes) and American (89 minutes) cuts on it.

Kevin Church said...
This comment has been removed by a blog administrator.
9:44 AM

HUGE fan of Shaolin Soccer. I've only seen the "pure" version. I heard the Americanized version had bad hip-hop music. I hope they didn't cut the egg-sucking sequences...

I con-quer, get God of Cookery posthaste.

Nice best of the year, Dave. and I liked Sky High too!

Upon watching both versions (i.e. bootleg chinese and American released dvd) versions back to back the differences are obvious. Yet perplexing. I think that the studio took things out that they thought would be culturally confusing. But in doing so only succeeded in making parts confusing.

2) I had heard the American DVD only had the American cut of the movie. After the U.S. releases of Shaolin Soccer and Iron Monkey (and this news story), I'm convinced that the Weinsteins should really just stop trying to bring Chinese cinema over here when they really don't know what the hell they're doing with it.

3) Hi yourself! (he said, channeling his inner Chris Claremont, and ain't it great that I can make a geeky joke like that and the Monty Python reference earlier in the post and have people get it)

Noooo!!! Serenity spoilers! I didn't get to see the movie in theaters (having a two-year-old will do that) and I just got the DVD for Christmas. I haven't watched it yet! Arg. I'm very unhappy now.

"Noooo!!! Serenity spoilers! I didn't get to see the movie in theaters (having a two-year-old will do that) and I just got the DVD for Christmas. I haven't watched it yet! Arg. I'm very unhappy now."

So you probably didn't know that Shepherd Book died too, right? Whoops!

Doane is a bloated crybaby.

Oh, man! Sorry about the Serenity spoiler - I'm a dick. And I didn't give props to any female bloggers - double dick! I suck sometimes...

And don't be such a meany, Anonymous. We're all pals here.

Wait, Campbell, does this mean Wash will pop out of Cloak's Cloak next summer?

It means at the end of the movie he straps a quiver of explosive arrows on to his back and gets too close to a fire.

or at least what it should've been

when you hiccough & morph at the same time

Your article is extremely impressive. I never considered that it was feasible to
accomplish something like that until after I looked over your post .

Office Chair Supplier in Mumbai said...
This comment has been removed by a blog administrator.
1:10 AM

packers and movers in mumbai said...
This comment has been removed by a blog administrator.
1:12 AM

packers and movers in mumbai said...
This comment has been removed by a blog administrator.
1:15 AM

packers and movers in hyderabad said...
This comment has been removed by a blog administrator.
2:19 AM