(Thanks to Mike Sterling for sharing this with me. Mike also shared that he found the video while searching for hot thor video leather.)
Posted by David Campbell at 10:57 PM 295 comments: 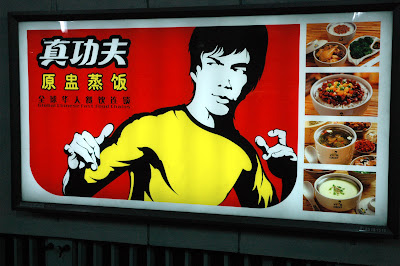 Check this out. My pal Ed Liu sent in these pictures of a fast-food chain in China called "Zhen Gongfu" or "Real Kung-fu" - with Bruce Lee in Game of Death as its mascot. That beats Ronald McDonald hands down. 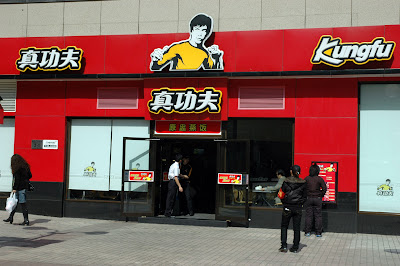 I want these to come to the States so I too can enjoy real Kung Food. 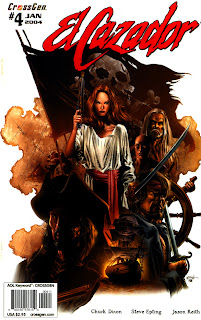 Pirates - both historical and contemporary - are not really nice people. They're seafaring thieves, rapist, and murderers. I don't particularly dig that kind of person on land, so I'm not sure why a thieving rapist suddenly becomes cool when they get on a boat. It's the romance of the sea, I suppose.

That's what it comes down to, isn't it? People like me enjoy tales from the Golden Age of Piracy because we're insulated from the brutal truth by several centuries and a firewall of fanciful books and movies. The romance and glamour of piracy has superimposed itself over reality, until we're left with a collective image of the pirate in pop culture that is utterly divorced from historical accuracy. Kids dress up as pirates for Halloween, we have National Talk Like a Pirate Day, and the Pirates of The Carribean films were blockbuster hits.

It's inconvenient to contemplate what piracy really means, because that gets in the way of the iconography. Little kids who play pirates never say, "Avast, I'm going to rape all the women onboard this ship and torture this priest until you tell me where you've hidden the valuables!" Well, I hope they don't anyway. The Pirates movies embrace all the trappings and brand identity of 18th century pirates but coyly steer clear of the grim truth. For movies that are supposedly about pirates there are precious few instances of actual full-on piracy in them. I don't want to overthink this, but there's something a teensy bit dishonest about those movies.

Remember in the third movie, At World's End, when Keira Knightly's character tries to rally the pirates to fight with a rousing speech about freedom? If you stayed awake long enough to get to that point in the movie, you might have though, like me, "Yeah, freedom to rape, steal, and kill." Because that's really the core value of those movies - their freedom is dependant on someone else's misfortune.

When people think about pirates they just focus on the window dressing, the iconic trappings of piracy rather than actual act of piracy. The Jolly Roger, walking the plank, buried treasure, cutlasses, frigates bristling with cannon, peg legs, squawking parrots, eye patches, violent diarrhea brought on by poor nutrition, treasure maps, etc. Pirates are a glamorous remnant of a time when the world was vast and governments were small.

But make no mistake - pirates are still out there, glamour or not. The US Navy regularly skirmishes with brazen Somali pirates who raid shipping in fast boats, then retreat back to the African coast before they can get caught. Pirates routinely attack shipping in the Gulf of Aden, off the coast of Nigeria, and ships in port at Dar es Salaam, Tanzania.

The big game in modern piracy is in the target-rich Straits of Malacca. This narrow waterway near Malaysia is a superhighway for ships heading to East Asia or India, and it's surrounded by thousands of inlets and creeks that make perfect hiding places for pirates. In 2004, a full 40% of all reported pirate attacks took place in these waters, and despite increased patrols, the problem is still out of hand. Freighters and tankers who travel through the Straits at night do so at great peril - many of them rake the darkness with deck mounted spotlights and high powered firehoses in an attempt to keep raiders at bay.

Check out the International Chamber of Commerce's Piracy Reporting Center if you want a glimpse of the scope of the international piracy problem - they have piracy alerts and a weekly report on global pirate activity that will convince any skeptics that piracy isn't just a thing of the past. Plus, it makes for interesting reading.

So why aren't these modern pirates popular? They're practicing essentially the same craft that the buccaneers of the Carribean practiced centuries ago. Nobody romanticizes modern pirates, because they don't have the benefit of the brand identity their forefathers had - they're just violent thugs with AKs and RPGs in small watercraft. Nothing glamorous there.

Jeez, where am I going with all this? I don't know, I guess I just wanted to talk about pirates. Oh! Right: I'm here to talk about El Cazador, a now dead pirate comic from now dead Crossgen Comics. 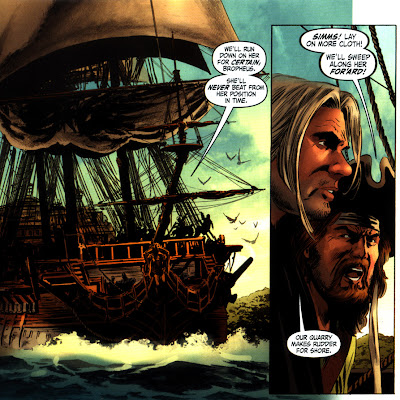 El Cazador was a slickly produced swashbuckler by writer Chuck Dixon, master of he-man action, and artist Steve Epting, who I like to think of as a modern Gene Colan. It follows the adventures of Donessa Cinzia Elena Marie Esperanza Diego-Luis Hidalgo - or just "Becky" for short - as she makes the huge leap from being a victim of a pirate attack to a formidable, revenge-driven huntress of the high seas who kicks ass in her ship, ElCazador ("The Hunter").

They only put out six issues and a one-shot before the series and the company were cancelled, which is a pity. They just don't make pirate comics anymore, and El Cazador was a good one. Dixon tread the line between familiar romantic pirate elements and a grimmer, harsher, scuzzier reality. The pirates in this book looked and acted like they haven't washed or gone to church in decades.

Epting's art is fantastic and perfectly suited for this project. I compare him to Gene Colan because of his liberal use of deep shadows and black ink, and his deft brush work. At least, I think he uses a brush a lot of the time. Regardless of the technique, Epting's art really raises the quality of El Cazador and makes it a visually stunning comic packed full of salty atmosphere. 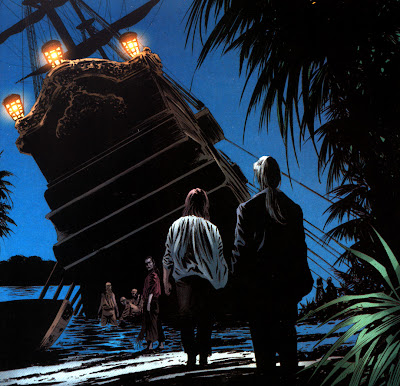 I believe El Cazador is collected in trade format. It's worth checking out, although the storyline ends prematurely and abruptly - just like many pirates.

One last thing. Here's a pirate map thingy I drew a little while back. Regular Dave's Long Box readers may know of my fondness for creating little cartoony maps, and it was only a matter of time before I did a pirate map. Click for a larger picture: 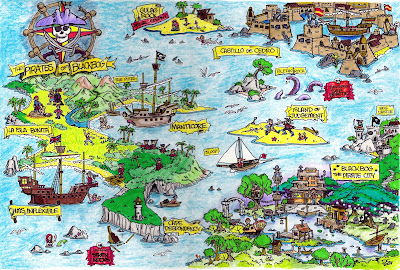 I'm not crazy about the coloring job I did on this one - those red parchment signs are hideous, and in the lower right hand corner? Those white things under the tree are supposed to be fireflies. Instead they look like Christmas lights. Oh, well. That's what I get for stealing my daughter's art supplies.

Wha--? Stealing markers from a little girl? That sounds positively... piratey.
Posted by David Campbell at 7:08 AM 112 comments:

Because I am easily amused...

I thought THIS was the funniest thing I've seen all week, and I watched Penn Jilette on Dancing with the Stars this week. I recommend turning up your speakers to maximum volume before visiting this site - particularly if you're at work! 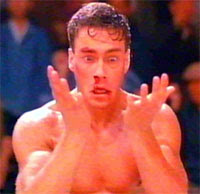 Oh, YTMND, what pleasure you have given me over the years. I only hope I can pull you from a flaming car accident to return the favor.

Thanks to King Superbad himself, Dusty Abell, for the heads-up.
Posted by David Campbell at 3:27 PM 43 comments: 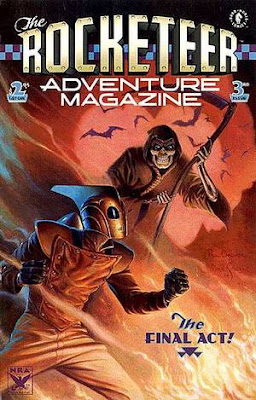 Man, say it ain't so! Artist Dave Stevens died yesterday, which totally sucks. This has been a bad month for geeks: Steve Gerber died, then Gary Gygax, and now Dave Stevens.
Stevens died on March 10 of leukemia.

I have been and am still a big fan of Dave's pinup work and his most famous creation, the neo-pulp hero The Rocketeer. I remember picking up the first Eclipse Rocketeer issue back in the day and being a little baffled. Was this some pulp hero that I had just never heard of? Was he a contemporary of The Shadow and Doc Savage that never reached the level of fame that his fictional peers did? The answer of course, was no. The Rocketeer was created by Stevens in the 80's as an homage to the rocket-pack wearing adventurers of serial fiction like Commando Cody. Stevens' Rocketeer is a beautifully drawn Valentine to a gee-whiz age of purehearted adventure. In lesser hands this material might have seemed the work of somebody who couldn't let go of his childhood fantasies, but Dave Stevens made it work, and his love for the source material was infectious. I'm sure I'm not the only one out there who took a second look at those old Republic serials because of Dave Stevens, which is kind of a nice legacy.

I only wished that Stevens had created more Rocketeer comics; he only drew a handful of them. And now that he's passed away, that handful of comics is going to have to be enough.
Posted by David Campbell at 12:49 AM 66 comments: 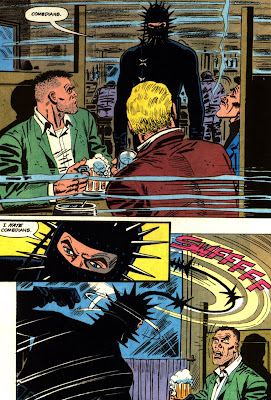 Do none of the crooks in Gotham City carry handguns? Because you know who could easily beat Metalhead? The rarely seen villain Man With Gun.
Posted by David Campbell at 5:25 PM 49 comments: