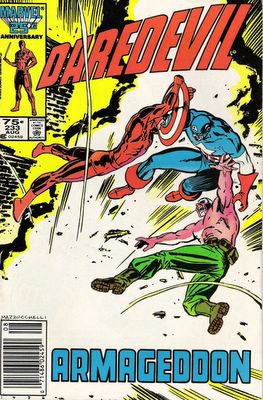 But I’m back and I’m going to extend Earth’s Mightiest Guest Stars Week into a second interminable week. Damn it, there are so many Avengers guest-appearances that I could not fit them into one puny week!

Here’s Daredevil #233, the climax to Miller and Mazzuchelli’s “Born Again” storyline. This comic contains one of the most memorable Avengers guest appearances, although it’s really little more than a cameo. Still, it rules.

I won’t bother you with a recap of the “Born Again” plot – I covered that briefly in a post about the big F*@% Yeah moment in issue #232. Suffice to say that in this final issue of the saga, Daredevil is finally back in costume and back in action. The Kingpin has flushed DD out by unleashing the rabid super-soldier Nuke on the Hell’s Kitchen neighborhood. As the neighborhood burns, Daredevil suits up and just kicks the living bejeezus out of Nuke. He’s got the psycho on the ropes, throttling and pummeling him –

- and then The Avengers show up and take over.

The entire sequence is narrated by Daily Bugle reporter Ben Urich, who is uncomfortably close to the carnage. Like, “ahh ahh my coat’s on fire” close. Urich’s street-level perspective of the events gives the whole sequence a sense of awe and grandeur. Seen through Urich’s eyes, The Avengers are larger-than-life figures: 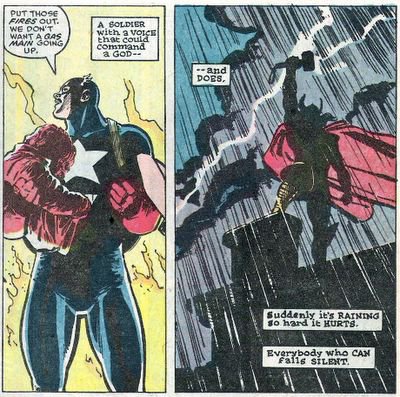 I love the way The Avengers are portrayed in this comic book. They arrive in a crack of lightning and a sudden downpour, descending from heaven like Greek gods. Wisely Frank “The Tank” Miller sticks with just the Big Three and doesn’t dilute the mythic effect by having frickin’ Ant Man buzzing around Ben Urich’s head and yelling in a tinny voice: “Hey mister! You’re coat’s on fire!” Because that would be stupid.

The Avengers aren’t just here to save lives and secure the scene, they’re also here to take Nuke into custody – and they’re not fucking around: 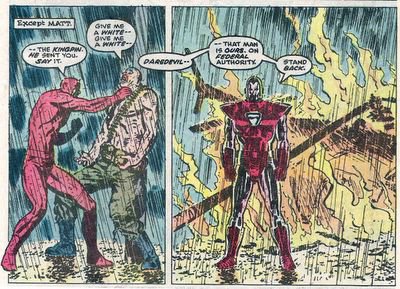 In real life when you stand in front of a burning helicopter and make declarations, people are usually too distracted by the inferno to pay attention to what you’re saying. But if you’re Iron Man, flaming aircraft are nice backdrops which add to the overall vibe and make you look like a bad-ass. I have to admit, Iron Man looks cool even though he’s wearing the Christmas Armor. 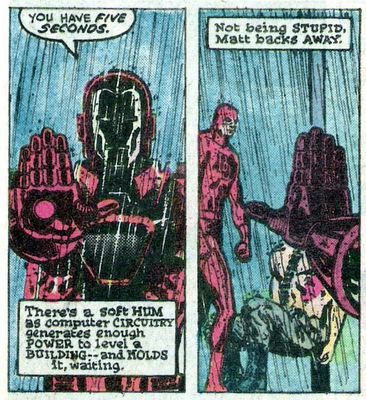 Daredevil backs off and The Avengers take Nuke, which is a good move, really.

Captain America is disturbed by this broken mirror image of him, and he plays heavily into the climax of the “Born Again” storyline. Almost too heavily, really. Miller’s version of Cap is so compelling that he kind of steals the show. 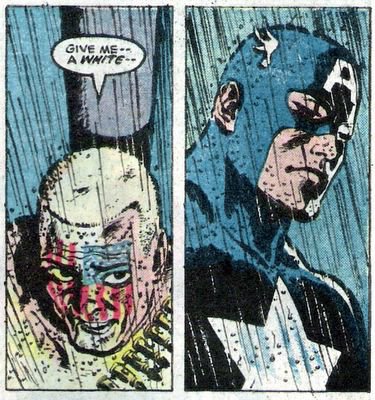 Posted by David Campbell at 8:24 AM

What could happen in real life that would derail Earths Mightiest Guest Stars Week? Inquiring minds want to know!

By the way, shouldn't Tony Stark be worried that his blood has enough alcohol to ignite when near open flames?

God damn, but that Reborn storyline was some of Frank "The Tank" Miller's best work. Ever.

Somewhat off topic, but was wondering if young Dave ever bought that X-Men vs. Avengers limited series that came out way back when? The one with the crappy Silvestri art? If so, would love to see your take on it some time.

I would have loved to see a Miller Cap series. One of my favorite lines ever is Cap's "I'm loyal to nothing general, except the dream."

God, I miss Mazzucchelli. He hardly draws anything anymore.

I always thought Iron Man was a tool until I read this blog.

I still get a macho kickass charge out of the "A voice that could command a god...and does" 2-panel sequence. Amazing sum-up of Captain America that, combined with the costume, tells you everything you need to know about him.

I also loved how Mazzuchelli doesn't even bother drawing all of Thor -- you see the big red cape and the boots and the silhouette of the hammer and that's all you need.

"Those who can fall silent." First time I read those pages, I knew how they felt.

Somehow I got Daredevil #233 long before I ever got to read the rest of Born Again, and it still kicked ass. If you ever see it, there's an old Marvel Fanfare Captain America issue drawn by Miller and written by Roger Stern (I think). Kinda sappy, but still great.

There. I said it.

Marvel should have shut down Daredevil for a year after the Miller/Mazuchelli run. It has the highest panel-to-F@#k Yeah! ratio of any book I've read before or after (including Batman: Year One). And what did we get in issue 234? Madcap. I bailed out a couple issues later and I've never gone back. Bendis Schmendis.

Wizard recently pointed to the Red and Silver armor as the most memorable armor.

This is why Wizard is evil.

I mean, they correctly identified the Daredevil and Cap armors as being hideous, but then said that the Silver and Red armor was great?

Didn't he used to mark his body every time he killed someone?

See? Bendis must have read this issue when he was preparing his Daredevil run, so how come his Avengers are so very much worse than Miller's?

It's all to do with catchphrases.

It's not rocket science!

I've said it before and I'll say it again: Best. Cap. Ever.

Oh my god I almost pissed myself!!

Cap and Thor are so damn majestic. Two panels, one apiece, and I want to be an Avenger NOW! I could put up with insane mutant red sorceresses and alternate universe Kangs so long as I got to hang out with the Hammer and Shield. In fact, I'll thumb-wrestle Jarvis for the honor of rinsing Cap's star-spangled undies with these unworthy hands and laying mints upon the pillow that would touch the fair golden locks of the Mighty Thor.

And I would feel ashamed if I did not also mention the incomparable Ben Urich. If "Born Again" is Airwolf, Urich is the pilot. If "Born Again" is F@*$ Yeah, Urich is the...uh, pilot. In fact, I'd thumb-wrestle Robbie Robertson for the honor of, well, nothing--Robbie's a BIG man, he'd break my thumbs!--but if he offered me a job at the Bugle, I'd take it. Because of Ben Urich.

You're right about Cap stealing the show. But in a /good/ way.

Best line in that book:

Cap: He wears the flag.

Yeah, this is one of Miller's best. IMO it's marred only slightly by the last panel (Matt and Karen, 2gether Again!). I think it's even better than the previous issue, which is saying something.

And, BTW, did you notice how much damn /story/ Miller packed into those issues? Cripes, today this would take 20 issues and two TPBs to resolve.

My word is bauugxk. Which reminds me: are you going to do Howard the Duck any time soon?

"I make it goddamn happen."

Captain's clazed look at Nuke agrees with me.

Its like he's thinking
"WTF is this guy mumbling?"

I have to admit, Iron Man looks cool even though he’s wearing the Christmas Armor.

Call it the Christmas Armor if you wish, but it has a mere fraction of the goddamn Yuletide spirit of Wonder Man's Christmas Tree costume. Now that thing was atrocious.

Actually, like prof. fury, I liked the red-and-silver armor. Partially because that's when I started collecting IRON MAN, although I was familar with the character previously. I mean, sure, they couldn't call him the "Golden Avenger" anymore, but that's a pretty minor quibble. And the suit hadn't looked like it was made out of iron since Tony first painted the clunky suit gold, so it was kind of silly for people to be purists about the color. I just thought the darker red made a nice contrast with the silver, and the suit was a little bulkier and more powerful-looking with the shoulder pads, so it was a nice look. And that armor did have some new gadgets on it, like the chameleon field (which they pissed away later) and I believe the pulse bolts also, among other things. Nothing wrong with the repulsors or the unibeam, but a gadgeteer like Tony should have lots of cool new toys on every upgrade, and that hasn't always happened. But the red-and-silver was just one more in the long line of Iron Man suits, better than some, worse than some, but nothing worth freaking out over either way. Change is one thing you can absolutely count on with Iron Man's armor, and that's the way it should be.

mister sinister, in the Miller version, Nuke took red, white, and blue pills (he was a patriotic drug fiend) with the following functions:

But according to his current origin they were just placebos, and he had an extra mechanical heart that injected those chemicals into his bloodstream. Sounds like they pretty much FUBAR'd his origin in WOLVERINE: ORIGINS, but here's a pretty thorough profile on him.

Chair Manufacturers in Mumbai said...
This comment has been removed by a blog administrator.
6:12 AM