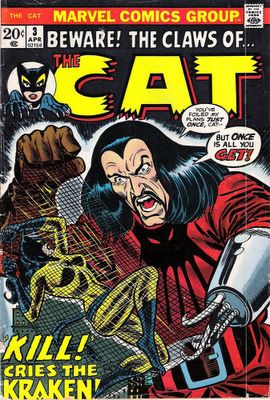 The Cat #3 features two fetishes common in the geek community: a) chicks in spandex with sashes/belts, and b) heroines in nets. But for me, it's all about Commander Kraken.

Everybody has that one villain or hero that they love regardless of logic, good taste, or popular opinion. For some, it's The Shaggy Man. For others, Clock King. Me? I'll take Commander Kraken. I was devastated - inconsolably devastated - when Commander Kraken was gunned down by Scourge in the Bar With No Name in Captain America #320 along with a host of lame villains. I guess I had been hoping beyond hope that there would be a Commander Kraken renaissance and my favorite villain would finally take his rightful place alongside Marvel's arch-villains. I mean, Kraken didn't deserve to die on the sawdusty floor of that nameless bar, his blood mingling with that of frickin' Bird-Man. He deserved more, damnit!

Commander Kraken was first a Sub-Mariner foe, but fought Iron Man as well. As you can see, his supervillain stock was falling in the early 70's because he ended up fighting The Cat - and losing. Ouch. I'll bet he didn't put that fight on his resume. Kraken was a malevolent metrosexual, a diabolical dandy, a gentleman pirate who committed nautical supercrimes with the help of a crew of buccaneer flunkies. In true pirate style he had a hook/claw thing on one hand that delivered electric shocks, and a boss Fu Manchu meets Dracula hairstyle. I'm so fond of him that I made a custom Kraken character for the PC game Freedom Force who was just ridiculously tough. Somebody made a Kraken skin for the game, so I can't be the only fan out there.

But enough about Commander Kraken. The Cat was a short-lived series about Greer Nelson, a feline crimefighter who wore a bright yellow outfit with blue accesories. Marvel's answer to Catwoman, The Cat never really took off, although she's been kicking around as a minor heroine in the Marvel Universe for years. These days she's called Hellcat (I believe)* and she still wears the same distinctive yellow bodysuit - you know, for stealth. I think a more appropriate moniker for her would have been "Day-Glo the Traffic Safety Werecat." She could teach kids the importance of wearing bright or reflective clothing while riding a bike. Of course, she'd have to lose the cat ears and wear a blue bike helmet, but I think she could pull it off.

This issue stands out to me because 3 out of 5 members of the creative team were female. Linda Fite wrote this torrid tale, with Paty Greer on pencils and Bill Everett on inks. Paty Greer was a fill-in penciller for this issue - I always thought that was a pen-name, but I Googled her and I guess I was wrong. I really like the art in this issue, particularly Everett's fine inking.

The story? The Cat investigates some strange sonar noises coming from the bottom of Lake Michigan, where she is captured by the unusually garbed occupants of a high-tech undersea lab that she assumes are members of the U.S. Navy. While she's captive, Commander Kraken and his men take over the lab. The Cat joins forces with her strange captors and drives the invaders away. Grateful for her help, the weird Navy guys let her go - only then does she realize that she's been helping aliens! D'oh!

Let's take a look at a page from the book. Kraken, who suddenly has lovely tangerine eye shadow, has taken over the lab. Unseen in her bright yellow costume, The Cat lurks above... 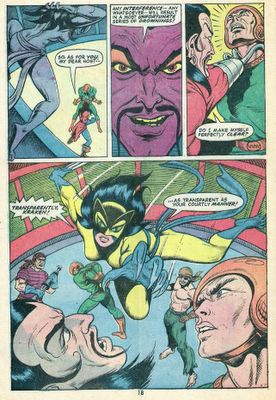 I have to say, Linda Fite's script doesn't make The Cat seem very bright. She gets knocked out not once, but twice, and she assumes the aliens are working for the Navy because as she's sneaking around the lab she finds a closet full off Navy uniforms. WTF? After Kraken has been run off she asks the aliens, "Why didn't you just tell me you're working for the U.S. government?" That's the kind of assumption that you'd make on a sitcom, where characters are required to be dumb in order to advance the plot. At the end of the book, she watches the subaquatic laboratory blast out of Lake Michigan - it was really a spaceship! At least The Cat realizes how dumb she's been: "I let my pride rule me... assuming that I knew all there was to know... and -- I don't." I think I spoke those very words after a history mid-term in college.

The Cat #3. Not a great comic, but it had a lot going for it: Commander Kraken, nice inking, and a superheroine with a sash around her shapely hips. I think modern comic book creators could learn a lot from this issue. Where are the sashes? Where are the heroines in nets?

And most importantly, where is the love for Commander Kraken?

*Correction! Patsy Walker is now Hellcat, in Greer Nelson's old outfit. Greer Nelson is now Tigra, formerly of The Avengers. My bad. Thanks to Prof. Fury for the save!

** Update!!! Thanks and praise be to Milo George, who pointed out that this issue has a fan letter from none other than Frank "The Tank" Miller, circa 1972. Here it is:

Wonderful! At last, a woman character with character. I, for one, am sick of the helpless female types which have cluttered up comics for so long. While I do think they are necessary and nice to look at, they don't have to be the only kind.

The writing is good; the art, excellent. Keep it up!"

-Frank Miller
Posted by David Campbell at 5:54 AM

Is it me or is there a preponderance of Cat/feline-based heroes and villains? (Well it seems almost as many as there are insect based characters) As a cat-hater, I find this Kind of annoying.

Not many wolf/dog or canine based characters, right? And most are Werewolves.

Surprisingly few bird-based characters, though I suppose the numerous incarnations of Hawkman can make up for that.

There are plenty of better animals to associate with heroes and villains. Doesn't a bear strike fear into your heart?

Yeah, but you know, that was one of the things that always bugged me about Marvel's premier bear-based character, Ursa Major, one of the Soviet Super-Soldiers. His power was, he turned into a bear. I mean, that's pretty impressive, but still, then he's just a smart bear fighting the Avengers or whoever. I don't really see him as much of an asset to the team.

I was just using Bear's as an example.

Think of Wolverine though and the animal wolverine.

Bearman would have the enhanced senses and enormous strength and tracking abilities and could get greater strength after "hibernating."

Thing is, there are lots of different species of cats to choose from, most of whom are a little scary and/or interesting. You've got leopards, tigers, linxes, panthers. lions, etc. Bears on the other hand don't have a lot of differiention (sp?). You've got grizzlies for scary and then you've got ... what? Pandas? Sun bears? Polar bears are scary in reality but those dang Coke commercials have made them all warm and huggable in our imaginations.

That always bugged me about Ursa Major, too. Couldn't he be like, a big mutant bear that was really strong, instead of a rooting-through-garbage-cans type bear?

And don't forget the Koala Bear! Not really a bear at all, I realize, but there was at least one great Koala-themed villain--can we so soon have forgotten Quantis, the Koala Who Walks Like a Man? http://www.thecomicshop.com.au/covers/comics/a/ambushbug-02-dc-nm.jpg

Read Philip Pullman's The Golden Compass for a nice treatment of Polar Bears.

Polar, Grizzly, Kodiak, Brown, Panda a decent amount of bears, but most look the same. How about the Justice League of Bears?


Seriously though there are plenty species of animals to choose from, thought the Crazy SuperBuck (Deerman) probably wouldn't strike fear into anyone's heart.

Is there a Hyena based villain? Or a wolf based hero? How about a crazy Aussie villain named The Dingo?

Well, there's Marvel's Red Wolf, though he's not exactly an A-lister. And The Hyena bedeviled Firestorm a time or two, but not to much effect.

Ooh, how about Black Bison, a Firestorm villain, and Razorback, a stupid Marvel hero/truck driver.

Man, I saw some Sun Bears at the Miami Zoo and they are goddamned adorable.

I think pandas *are* bears now. I think they've just recently been reclassified as part of the bear family. Or possibly they *were* bears, but now aren't. I forget.

Anyway, from the Fish and Wildlife Service page:
"Scientists have debated for more than a century whether giant pandas belong to the bear family, the raccoon family or a separate family of their own. This is because the giant panda and its cousin, the lesser or red panda, share many characteristics with both bears and raccoons. Recent DNA analysis indicates that giant pandas are more closely related to bears and red pandas are more closely related to raccoons. Accordingly, giant pandas are categorized in the bear family while red pandas are categorized in the raccoon family."

Back to Kraken -- he's one of the few villains to ever discover Iron Man's true ID!

No shit? I did not know that.

See, this is what I'm talking about: Dan Coyle is FIVE TIMES the geek I am! Guy's a frickin' encyclopedia...

How about Drizzly Bear? Is that a superhero or the name of the website I was visiting last night? (If you got that joke, you are gay.)

Isn't this the CAT issue that has a note from young Frank Miller in the letter column?

Re: "And Hellcat is Patsy Walker in Greer's old outfit.

The costume that Patsy found in "Avengers" #144 (Feb 1976) was similar to the Cat's, but not the same. Amongst the differences, one's easy to spot: The Cat uniforms all had a "cat's paw" emblem on the chest. The Hellcat costume did not. My opinion on this was that Brand Corporation heard the same rumors that Iron Man repeated ("The rumor in financial circles was a crackpot named Donalbain created the costume...and its powers...for his own purposes" and decided to try making their own.
Hope this helps,
darci386@yahoo.com