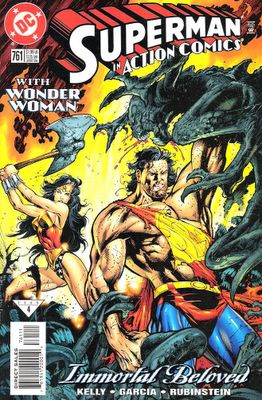 "If a woman sleeps alone it puts a shame on all men. God has a very big heart , but there is one sin He will not forgive: if a woman calls a man to her bed and he will not go ."

Action Comics #761 is a romantic mini-epic from writer Joe Kelly's run on the book, during that brief period in 2000 where it looked like DC was going to start putting out good Superman books on a monthly basis. Alas, it was not meant to be, although there were a few nuggets of superhero goodness during this period - mostly Joe Kelly's stories, now that I think about it. 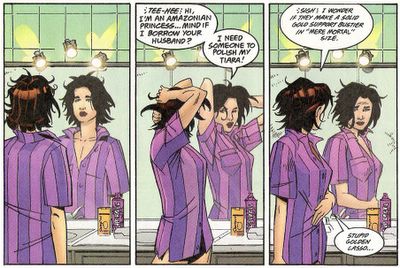 Although very little time is passing on Earth, Superman and Wonder Woman battle in Asgard for a thousand years. I don't know if Joe Kelly really means for us to believe a thousand years have passed, or if he's being fanciful. Anyway, a really long time passes for our two heroes, who battle with the Asgardians day in and day out. There's a great sort of montage in the middle of the book that depicts the passage of time really well, and there's a clever series of panels that depicts Superman and Wonder Woman sleeping in the Asgardian camp around a campfire. They start on opposite sides of the fire, but as time passes, in each panel they move closer together until Superman and Wonder Woman are sleeping in each other's arms next to the campfire. He's torn between his devotion to his wife and his powerful bond with Wonder Woman. Superman can no longer remember Lois' middle name, and "Diana smelled like orchids and fire..."

Finally, their epic campaign reaches an end, and on the night before the final battle, a battle weary Clark and Diana meet in his tent: 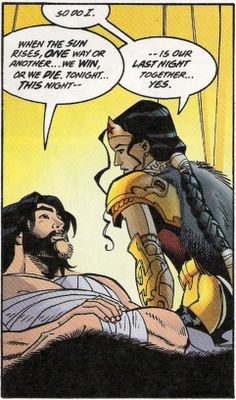 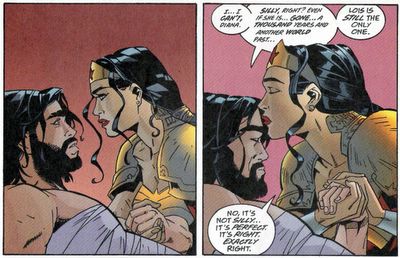 He says no. To Wonder Woman.

Superman, you must be out yo mind.

It's the tent scene that snaps my already stretched suspension of disbelief. I mean, I can believe that Superman can fly, or that he has heat vision. I can even believe that he has super-ventriloquism and can turn back time by flying around the Earth really fast. What I cannot believe is that under these circumstances Superman would not have sex with Wonder Woman. It's just not physically possible. And let me tell you, if it were me, it wouldn't have taken a thousand years to get to that point, either. I'd last maybe six months and then I'd be all, "Hey. Wonder Woman. How you doin'?" His millenium-long chastity doesn't make me think he's a noble hero, it makes me wonder if he's not mentally ill.

The whole scenario is so implausible that it mentally pains me, and therefore receives my new "The Pain!" banner which I shall award to things I think are painfully stupid.

Okay, I'm settling down a little. I confess that despite my histrionics I actually like this issue quite a bit and I think Kelly deserves points for his unabashed sentimentalism and the fact that he wrapped the story up in one issue. And of course, I understandwhy one wouldn't want Superman and Wonder Woman making sweet Asgardian love, but I think they should have, it would have been more interesting. So despite my mockery of Superman's lame decision making, I think it's a swell comic.
Posted by David Campbell at 12:58 PM

"Sweet Asgardian love"? You are my hero.

oh the days when Joe Kelly was a Wizard hot author.
Those days are past from what I can tell. Does he do anything anymore?
I look at this book and it seems like a relic of the past, yet, this is pretty recent stuff. amazing.

A baseball cap with that THE PAIN logo on it would be perfection. :)

oh the days when Joe Kelly was a Wizard hot author.

That was right off of his work on Deadpool, wasn't it?

Those days are past from what I can tell. Does he do anything anymore?

The last time I read anything by him was his JLA run a year or two ago, which was unfortunately a somewhat weak run puncuated by occasional strong issues.

I'm laughing my ass off at Superman going A THOUSAND YEARS without sex, and then passing it up just before he dies. Suddenly I feel vastly superior to him, don't you? Poor loser with his pathetic X-ray vision and flying powers and super-strength, someone should just put him out of his misery.

But let's be fair to the man. It's not like she's even the same species for Rao's sake. Let's say my Dad realized the city of Buffalo was going explode a few decades ago (we should be so lucky). If he sent me in a rocketship to Africa to live amongst a race of not so bright chimps, I might use my greater abilities to be their protector, but it's not like I would find any monkey all that attractive even if they were wearing a wonder woman costume.

Well, probally not at any rate. Is there booze involved? A man might get a tad lonesome out there. I'm sure there's a fetish site for that sort of thing.

g.bob, you've got it backwards. it's lois who's the equivalent of the chimp. wonder woman is a goddess, much more akin to superman.

I don't think sex has any place in classic heroes comics. Comics were made to inspire a sense of nobility. The whole introduction of sex into comics has made some of the hero's lives into a lame soap opera.

The phrase "grim n' gritty Space Ghost mini-series" is everything I love and hate about comics in a handful of words.

I actually liked those Superman comics Kelly did. Including this one. Yeah, blah de blah truly Superman is superhuman for resisting WW blah de blah but I don't mind unabashed sentiment if it's done right and Kelly could do that.

Well, both Lois and WW are chimps to Superman in this case. The question in this analogy is "would you rather sleep with a chimp who acts more human or less human?" I think it's a question we all have asked ourselves before we had sex with an animal. If you had to bonk a horse, would you rather it be Mr. Ed or a horse that can't actually speak? It's an age old debate covered in even the most basic ethics class.

Point is, anytime you sleep with someone outside your species it's bound to get a little weird. Don't judge a man untill you've flown a mile in his cape, as the old saying goes.

Yes, but they're hot chimps...

Excuse me while I go touch myself while watching Planet of the Apes.

hey, there was (not long ago) a similar story-line where a huge fight was taking place and the only JLA members left standing were Batman and Wonder Woman. Before their final rush into battle they kissed (sending huge ripples into the geek collective unconscious).

Anyone remember the issue number of this? (probably in the ongoing JLA series)

I think it was JLA #74, during the really long "Obsidian Age" storlyine written by none other than Joe Kelly. If I recall, the Batman/Wonder Woman romance subplot culminated in an issue where both heroes do some holodeck roleplaying of possible what-if scenarios if they were to hook up. They decide to just be buddies.

Hated it. C'mon, Batman's not going to hook up with Wonder Woman. Or more accurately, I don't think WW would hook up with Batman. It just seems out of character. And stupid.

I second the motion for a "The Pain" baseball hat. Maybe it could even be a trucker hat so we could all be as cool as Ashton Kutcher.

The whole chimps thing...that crossed my mind too, maybe Superman is just not all that libidinous, y'know? I mean for one thing he's an alien, so: chimps. But for another, didn't the Byrne retcon make the Kryptonians into these bloodless logic-people? So maybe, taking those two things together, it's not his fault.

But then he would be a very strange cat indeed, wouldn't he?

...No, no, I'm kidding! No point trying to rationalize dumbness away when it's just dumb. Superman clearly sleeps with Wonder Woman in this situation, but then again clearly Superman cleans up Asgard in an afternoon and a half, right? No thousand years necessary. The thousand years is only in there so he and Wonder Woman can think about having sex and then not do it. But then what's noble about that?

The chimp comparison just doesn't work. Batman's always talking about how dumb Superman can be, the guy isn't thinking on some plain higher than all of mankind. Obviously Superman is different from us biologically, but then again there are differences on the biological level of most the races of mankind. The only real concerns I could think of is that Superman could potentially kill Lois while having sex. Torture yourself with Mallrats for more speculation on that subject.

While the "super-chastity" power is kind of lame, I still don't ever want to read about a Superman who would cheat on his wife.

Joe Kelly: almost always potentially interesting (I may be the only one, but I really liked his last big JLA story with the burning Martian), almost always costrained by having to put DC' or Marvel's toys back in their boxes (see: Obsidian Age & Bats & WW in JLA, X-Men), occasionally indecipherable (see: M.Rex, Steampunk).

Actually, I think WW would be more likely to be attracted to Batman than Superman. The only reason a Superman attraction strikes us as right is because they both have monty superpowers.

However, WW is an Amazon, and would more likely approve of a warrior badass like Batman than Superman. After all, her mother fell for Hercules, and that guy was a total jerk.

Unknown said...
This comment has been removed by a blog administrator.
1:04 PM

Who did the art on that issue? It looks familiar, and I kinda like it.

The art on the issue was German Garcia, who did the art on a few X-Men issues when Joe Kelly was the writer.

Garcia was part of the Superman revamp that Kelly and Loeb were a part of, but then got a better deal elsewhere (Europe, I believe), and was replaced by the much less cool Kano, who is now apparently the new artist on Gotham Central, to which I say - KANO?!?!

As much as he might like to be, Kal-El isn't human. He's better than us, biologically, morally, period. Which seems to be at the root of what pisses off both Batman and Lex Luthor, i.e., Kal-El doesn't behave as they would given the same abilities (or opportunities). He could (and does) pass the Ring of Giges test...

HE got mom issue for sure!

You’ve written nice post, I am gonna bookmark this page, thanks for info. I actually appreciate your own position and I will be sure to come back here.
Signature:
download free Descargar Whatsapp Para Android and download baixar whatsapp para celular online and descargar whatsapp , baixar whatsapp gratis

Hello, just wanted to say, I loved this article. It was practical.
Keep on posting!
juegosjuegos.com
juegos de matar zombies
jogos do friv

a片 said...
This comment has been removed by a blog administrator.
2:17 AM