Welcome to No Profanity Week! 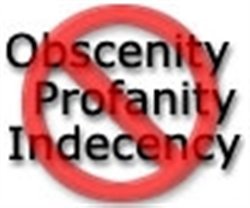 I'm excited to announce that this week is No Profanity Week at Dave's Long Box.

That's right, this entire week my posts will be completely devoid of any swearing.

I've come to realize that I have a mouth like a longshoreman and that darn it, I want the kids to be able to read and enjoy Dave's Long Box without any foul language. Plus, a lot of folks read this at work, and although I don't, you know, put swear words in bold type or anything, I want people to feel comfortable reading this at work. For a whole week - seven full days - there will be no cussin'. Who knows, if it goes well, I may even have No Gratuitous Use Of Italics Week.

The unofficial sponsor of No Profanity Week is none other than Nature Boy Ric Flair, the best darn wrestler ever! Every time I make it through a post without any dirty words, Ric Flair will congratulate me as only he can.

Wish me luck everybody! 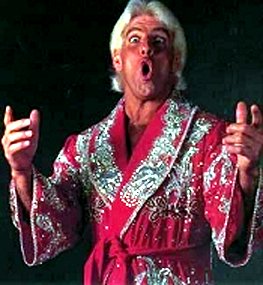 "to be the man, you gotta BLEEP the man."

I'm not sure trading in profanity for gratitious pictures of Ric Flair is such an improvement....

But instead of fricking, which is still too close to the f-word, why not use the DC approved felching?

How about the Farscape approved "frelling?"

-Whether you like it, or you hate it, you better learn to LOVE IT because its the best thing goin'! WHOO!

In 80's era Blackhawk they used the word "phugging."

I'm thinking of going with psuedo-swearing, like in the movie Johnny Dangerously: "You farging icehole!"

A while ago, I coined the term "monkey finger" as a good substitute for swearing. Also "Mork'n'Mindy!" They haven't caught on, but you're welcome to them.

You sold out, man!
I don't believe in nuthin' no more!

It's a goldarn friggin' shame.

I remember briefly trying to use "frack" when I was a kid watching the original Battlestar Galactica - I had to stop because my friends mocked me and I couldn't convince my mom that it wasn't actually a dirty word.

Does this have anything to do with the sudden realization that your MOM reads your blog?

Somebody ratted us out, man.

No, I think this is a good move because otherwise the only thing stopping me from recommending this blog to other people was the language.

Now, if you are not encumbered by that leftist "artistic integrity" B.S. you can go back and change all the old F words in past posts into frack or fark for flick (but not FLICK) or stink or whatever the heck you want to use.

I've been wondering when Dave was going to clean up his pottymouth and thus remove the last remaining barrier that keeps children from enjoying Dave's reviews of 20-40 year old comic books.

Never fear - only one week. Then, it's filthy potty mouth time again.

Funniest edited-for-tv movie I've ever seen: "Do the Right Thing." In a really dramatic scene that leads to a riot, one character calls another a "mickey-fickey."

My favorite TV editing for profanity is in Scarface: "America is like a big chicken just waiting to be plucked." Runner-up is Blade: "Some other fellow is always trying to ice skate uphill."

You should use some sort of markup to identify any swear words. (like a <cuss> tag) And then, I'm not sure if blogger lets you do any sort of scripting or not, but if it does, have a script replace any cuss words with a random word from the suggested pseudo-swears.

I always get weirded out by Garth Ennis' use of "motherlovin'" in non-"suggested for mature readers" titles. It showed up a lot in Hitman and non-MAX Punisher.

I always liked "smurfing" as a profanity replacement. As in those two smurfing smurfs are smurfing each other in the smurf.