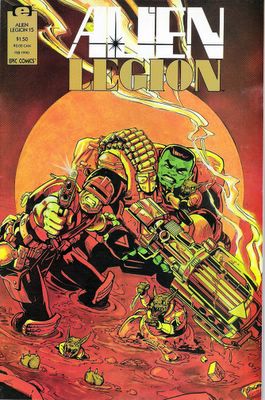 Alien Legion was a sci-fi military series from the 80’s published by Epic, a marvel imprint. Created by writer/editor Carl Potts, Alien Legion was basically the French Foreign Legion in space, featuring a cast of hardened alien scum who embark on Dirty Dozen type missions. If I’m correct, there were two regular Alien Legion series as well as several mini-series. Alien Legion was drawn by artist Larry Stroman who visually created the look of the Legion universe, and was often written by Chuck Dixon, the Alistair MacLean of comics! I don’t know if that’s accurate; it just sounds right. Anyway, this is issue #15 of the second series, by Dixon and Stroman.

This is part one of a two-part story when the bad mofos of Force Nomad mop up after a civil war between the sexes on the planet Mmrosdia. The soldiers are tasked with removing a group of mercenaries from the losing side from a huge mass driver industrial complex. The Legionnaires infiltrate the complex via the waste discharge tunnels, where they find nothing but trouble. The featured characters in this issue are Gronk, a big alien who talbs like dis all de tibe, the hard-ass human Captain Montroc, a trio of armored raccoon aliens, and Jugger frickin’ Grimrod.

Man, I thought Jugger Grimrod was the coolest. Grimrod was the Wolverine of the team, a superbad, supercynical soldier with a scouser accent and a bad attitude. My favorite Alien Legion comic was issue #5 from the first series, which was an all-Grimrod issue. He gets stranded on an enemy planet and basically just goes into full-on Rambo kill mode, blowing up stuff and strangling people with his molecule-thin “molywire” garrote. I’m distraught because I can’t find that issue anywhere in my boxes. I really need to get this stuff organized…

Anywhere, here’s Jugger griping about something as per usual: 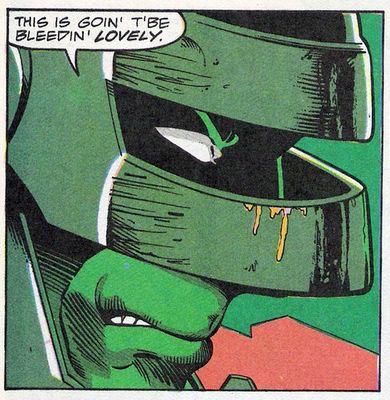 He’s so frickin’ cool. See? I’m not swearing. It’s all part of No Profanity Week here at Dave’s Long Box, where the kids come first!

I do have one pretty big complaint about this issue, which I like otherwise. Normally I really dig Larry Stroman’s stylized art, which is perfectly suited to science fiction. But check out this last page, where Jugger learns that the mercenaries they’re fighting are led by… his father! 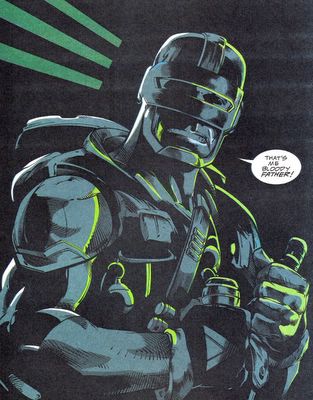 But wait a second...

As a child of the 80’s, that particular image looks awfully familiar… 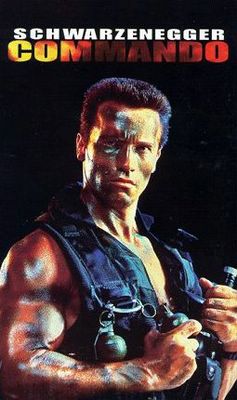 What the hell? Certainly Stroman is capable of drawing Jugger Grimrod without cribbing the image directly from the fucking movie poster from fucking Commando! I call bullshit on that!

I hate to be the guy to bring this up, but that’s kind of weak. Otherwise, good issue. 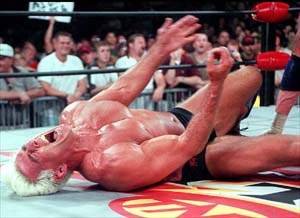 Shit! I let The Nature Boy down! Please forgive me Ric Flair!

UPDATE: Dave's Long Box reader Zack has helpfully pointed out that it was not Larry Stroman but rather artist Frank Cirocco who actually designed the look of Alien Legion, and did the art on the first few issues. Thank you, good sir.
Posted by David Campbell at 5:08 PM

Here I was, letting my 2-year-old read your fine comics review, and she turns to me after reading this and says, "Fuck!" Now she's calling her mother a whore and tying firecrackers to the cats' tails - all because of you! I hope you're happy.

Stroman is a good artist. What the fuck ever happened to him?

I'm not mad so much as I am dissapointed.

Didn't Stroman do Peter David's X-Factor run? I remember thinking "one of these things is not like the others" when X-men relaunched with Jim Lee, Uncanny had While Portacio, X-Force had Lifield (sp?) and X-Factor had Stroman. He seems to be the antithesis of those Image guys. At any rate, a solid artist.

Are any Alien Legion trades available? Sounds like a good series.

It's not stealing, it's an homage.

Ahhh, Alien Legion: one of those series which always seemed more interesting than it was.

It's the figure-four for you, you naughty thing.

I've just got to say thanks because, while this site has been a real pick-me-up daily, I haven't laughed as hard in the last year as I did at the Nature Boy's first appearance.

There are two or three ALIEN LEGION trades available now through Checker Publishing. Those are Chuck Dixon/Stroman-era stories, too.

What a gnarly twisted inbred world we live in. . .

Hey I just wanted to note that Frank Cirocco was actually the original artist/designer on Alien Legion. He did the first several issues, and though stroman was pretty decent, Cirocco was Frickkin' AWESOME.

Tequila Dawson has a dog named Symbiote. A symb is a is a genetically engineered utterly dependent lifeform. In its infant state, it lacks anything resembilng a brain or nervous system - all an infant symb can to is slowly metabolize sunlight.

Symbiote the dog, however, eats bugs and spits acid.

Alien Legion is a hoot and really, whose doing Military-SF comics these days? Anyone? Here's a sub-genre we could use a surge of in comics, and less of the brutally unfunny small-press superhero parodies, sophmoric T&A books and cheesy tie-in comics, whatever's the overdone flavor of the month, it was monkeys, then ninja and maybe pirates, maybe zombies, or whatever it is now that keep cropping up in Previews in place of sub-genres I'd really like to see more of.

Zack, thanks for the Frank Cirocco info, I will make an update/correction thing.

And I had forgotten that Loeb wrote Commando - that's funny. My favorite line in that is when Arnold impales Vernon Wells with a steaming pipe and he says, "Let off some steam, Bennett." Props to Loeb for writing that.

Anyone remember Strohman's short-lived all-African-American cast in Image's "Tribe"? I think it lasted for three short issues. I loved that guy's work.

I have Tribe #1!!!! An embossed collectors item for sure!

I, too, have Tribe #1 somewhere in one of my boxes. If I recall correctly, there was only one Image issue, then Stroman and Co. self-published a few issues after that. Tribe allowed Stroman to indulge in his interest in drawing big butts, and I say more power to him. Larry Stroman: the Sir Mix-a-Lot of comics.

There are piles of ALien Legion comics rotting away in my local Half Price Books store, and I've often wondered what they were, and why they were so bad that someone offloaded hundreds of the buggers.

Oh, and Anonymous, 2000ad are doing military-SF comics every week, just as they always have done, and always will.
Whether that's a good or bad thing, I leave to you. :)

At one point I had all the published issues of Tribe. Stroman and his writer/co-creator Todd Johnson self published issues #2 and #3 under their Axis Comics imprint. Axis Comics unfortunately crashed and burned pretty quitely, despite a lineup that included (IIRC) Beau Smith, Joe Phillips, Javier Saltares, and Rob Haynes.

Only Saltares' B.E.A.S.T.I.E.S and Smith's Dethgrip were released, then Stroman, Johnson, and Axis disappeared, Stroman contributing the art to random issues of Excalibur and What If...?.

Then, in 1997, Tribe suddenly returnd with Johnson and Stroman reunited, publishing issue #0 under the Good Comics banner in a confusing story that concluded the storyline where the bad guy got his ass kicked by the big butted girl, who suddenly had godlike powers.

Hmm, Checker just came out with a new volume recently collecting the first six issues of the first series (they'd already collected the second series), and issue #5 doesn't look like the all-Grimrod issue you describe. I think you were thinking of issue #5 of the *second* series, in which the framing story is Jugger narrating the story of his solo survival story to a court of inquiry.

Also, and I can't believe I'm this much of a geek, Jugger's mollywire garrot wasn't for *strangling* people—it was *sharp*. In the first issue of the first series, he pulls it out and uses it to behead some poor bospor ("SLICE!!"). That was the point where you, the reader, were supposed to say to yourself, "Holy cow, he just cut that guy's head off! This is clearly an Epic comic intended for Mature Readers!"

Stormwatch: Team Achilles was military sci-fi, more or less (or at least military superhero). It had bad art for most of the run (mostly from the aforementioned Whilce Portacio) and was written by Micah Wright, who's more famous for not lying about being in the military than writing comics, but I still thought it was as an interesting series.

And, as Kelvin mentioned, there's always 2000 AD. I'd definitely reccomend The Ballad of Halo Jones, if nothing else, where the last 3rd of the book is Military SF. It was written by Alan Moore, and it's got the same character driven, idiosyncratic style that makes his superhero comics so interesting.

Also, I remember liking Stroman on David's X-Factor when those issues were coming out. No one's ever going to read this, are they?