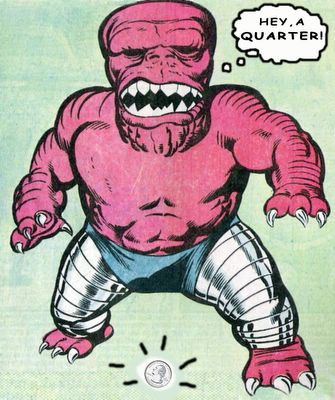 OK, I have to come clean. I do not actually have the Eternals comic books that Karkas appears in. I just found him in the Official Handbook of The Marvel Universe, Deluxe Edition #6 (Human Torch to Ka-Zar) and thought he was mockable. And to be honest, he's not even a villain. With a name like Karkas and a mug like that, you'd think he would be a villain, but no.

Karkas, so I have learned, is a Deviant, "an evolutionary offspring of humanity which is cursed with an unstable genetic code" that often fight The Eternals. I wonder who named The Deviants? Probably The Eternals. I mean, nobody would name their entire race "deviants." It's just not good branding. That's like saying, "Hi, we're from a friendly race of spacefarers called The Annhilators. We come in peace." or, "Hello, we are peaceful humanoids known as Pervs. We seek shelter." I'd be hiring an image consultant if I were the Deviants.

Anyway, Karkas is a nice Deviant who is covered in thick elephantine hide, can bench press about 25 tons, and has strange "claw-like single jointed digits on each foot and hand." That's the part that caught my attention. How does he open a jar of pickles? Or a door? Perhaps The Deviants have some sort of ADA policies in place for folks like Karkas. There's a funny bit in his Handbook entry that addresses this:

Limitations: Karkas's lack of opposable thumbs prevents him from utilizing many ordinary tools.

Don't get me wrong, I think Karkas looks cool in a crazy comic-book way. He looks like one of those old Monsters on the Prowl creatures or something; it smells like a Kirby design to me. But the no-thumbs thing... Damn, couldn't they have set Karkas up with some thumbs?

As James Coburn would say: "That's just mean, man!"
Posted by David Campbell at 5:10 AM

Karkas was a Kirby creation, and Kirby's Karkas was great. Sometimes the Official Handbook just didn't (or couldn't) do justice to those 70s Kirby characters, which is why he looks so goofy and sounds so pathetic. Plus, he hung out with a Deviant named Reject, so ugly even the Deviants rejected him. Why? Because Reject looked like Tom Cruise ala Kirby. When you're 8 years old, nothing beats a Kirby comic for powering the imagination! Really, all I'm saying is that Karkas was no Slipknot.

Wait - isn't that an opposable thumb on his right hand in the picture?!?

Uhhh... NO! No, that just looks like an opposable thumb. I'm photoshopping that thing off tonight and then people who read this post will wonder what you're talking about, Augie. They'll think you've gone quite mad!

And Reject - how could I have forgotten Reject? A name like that just bolsters my case for getting the Deviants an image consultant. I think he had a lil' brother named Eject - he could produce rewound video tapes from his mouth at will. No, wait - that's stupid, I made that up.

And don't forget their cousin Deject, the most depressed Deviant there was...

What did Thena see in them anyway?

Maybe it's a tumor and he's really sensitive about it--that's why he wants that quarter: to get the operation. Now he's doubly sad!

I think he should join the Justice Leauge. Just so Aquaman can have someone around to feel superior to. You know, they'll all be hanging around the Hall of Justice and Aquaman can make Karkas feel inferior by using a screwdriver or something. The morale boost for the team should be worth having someone around who's allways asking for help opening doors and stuff.

Good point about the PR thing. Many villians could use a PR consultant. Look at the Empire. If Darth Vadar just called it the "fluffy side of the force" rather than the "dark side" it would be much easier to recruit Luke. "Give into your anger and embrace the fluffy littl' bunny rabbit side." You can't say no to that. That damned terrorist insurgent rebels never could have had a chance after that.

And "Legion of Doom"? C'mon, even Focus on the Family has better PR sense than that.

As Tom Cruise has shown us, never fire your PR guy and show the world how bat shit crazy and evil you are.

I've got an issue of Avengers, from the 90's leather jacket era, in which Karkas appears, I think, as a member of the team.
The proper Avengers are all captured, and so a new team is formed from Z-listers, and Karkas is one of them, iirc.
But he didn't get an Avengers jacket, either way.

Man, those jackets were sooo Xavier's. I'm including those in my upcoming superhero fashion show.

Bendis missed a trick by not having the New Avengers find those jackets in the closet. I bet Spidey would have worn one.

I was always hoping that Spidey would join the Avengers.

and I thought the jackets freaking worked! If I were writing the Avengers Spidey would be one of the heroes wearing a jacket. Let's face it. Super-hero teams with money and jets or teleporters fly and travel all over. Heck, just living and operating in New York City means that the hero doesn't always fight evil in ideal weather and Spider-Man does not wear thermals, a special costume, or an all-weather suit!

For heroes or heroines that just don't have warm-weather costumes it makes sense that the Avengers supply a freaking jacket!

As for the Deviants... this strikes upon a conversation I had with Alan Kistler on another one of the many reasons it was bad that Sinestro was retconned into being Hal Jordan's teacher.

His name is SINESTro! "Hi, my name is Bad-ass-Killulon, and I will be your teacher." I'm not hanging out with a dude named Captain Evilface. Why does Green Lantern?

anyone know what happens when you cross an Inhuman and a Deviant?

I'm thinkin' Karaks would be really good at opening pickle jars; those claws look like they'd get a real nice grip on the lid.

And here's Karkas' Z-lister Avengers team, apparently called the Delta Force, although I don't remember them going by that name in the actual comic...

Sinestro was obviously using the original Latin meaning of "sinister," which just meant "left-handed." Because he was the left-handed Green Lantern. And he liked dead languages from a planet he had never visited.

But that's why he went evil in the end. The rings only made right-handed scissors, and apparently that REALLY CHEESES off them lefties.

I hate to admit it, but I have quite a few issues of The Eternals stashed away. I haven't looked at them in years, if not decades.

I also have the Eternals limited series from the late 80's (somewhere). Not only was Karkas a Kirby creation, the Eternals, the Deviants and the Celestials are all Kirby creations. His Marvel Space Opera much like Apokalypse and the New Gods were in the DC continuity (more Kirby).

Anyhow. The wife dumped my collection of Kirby Dots in the other room. I have to go pick them up.

Man, I love Marvel Appendix. It's good to know that however lame and/or obscure any given character is, there's always someone who'll remember them.

The profile on Delta-Force at one point says "The team members sent to the arena managed to free the Black Knight and Giant-Man from the brain-mines that were controlling them." When I first read that, I thought it said "brain-mimes." That would seriously have made it the best comic book ever.

Also, Delta Force has a member who's a Deviant Mexican wrestler called Toro Rojo, which is Spanish for Red Bull. So is one of his powers to give people wings?

Chris Arndt asked:
anyone know what happens when you cross an Inhuman and a Deviant?

The Deviants really ought to take some pointers from the mutant lobby. Mutants don't sit around crying about being freaks (much); they put on ridiculous outfits and fight for freak-pride. I'm kind of surprise no X-Men writer has made the connection and brought them into the X-books. I'm imagining Karkas in the yellow and black X-men trainee outfit, and, dammit, it works.

The hook for Karkas was the typical Marvel-esque "Things Are Not As They Seem" bit.

Ol' Karky was a gentle and refined soul. His fellow Deviant, Ransak the Reject, was handsome and well-formed, but dumb, bat-guano crazy, and violent. They met in the gladiatorial arena of the Deviants, where The Reject kicked Karkas's non-violent cherry ass.

So the ugly one was the human and the pretty one the monster. And they were stuck with each other, as Karkas felt responsible for his dippy compatriot.

Ah, Kirby. Not a subtle man. But dammit, I love him.

Zoot Koomie would get a prize from me, if I gave out prizes.

It was deliberate trivia, a quiz, so to speak, and he got it right.

Now. Who were Maelstrom's three sidekicks and in what comic did their infinite supply of extra clone bodies get destroyed?

Gah - were those 'Avengers Only' jackets? Like 'Members Only', I don't think they were every *really* cool.

Chris Arndt said:
Now. Who were Maelstrom's three sidekicks and in what comic did their infinite supply of extra clone bodies get destroyed?

They were Gronk, Phobius, and Helio. As I recall, Gronk had the powers of being strong, fat, and bald, plus density control similar to that of the Blob. Phobius was an ugly weird-headed little bastard with--you guessed it--fear powers. And Helio had crazy windblown hair, was incredibly mobile in the air, and actually weighed 0 lbs, I think. Plus I'm willing to bet that he talked like a Munchkin. The last time I remember seeing them was in Quasar, right as his conflict with Maelstrom started heating up.

That's all from memory, but I'm pretty sure it's in the ballpark. As for the question about the clone bodies being destroyed, I think that was in Marvel Two-in-One, I'd say somewhere in the 70s or 80s range in terms of issue numbers. I own them, but it's probably been 15-20 years since I've read them.

Pretty helpful info, much thanks for the article.
metal building