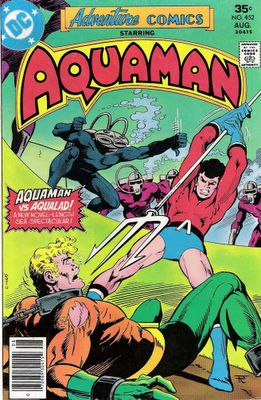 Remember back in the day when comic book covers regularly depicted scenes which did not happen in the comic itself? Covers were often symbolic or even allegorical. You’d buy an issue of Detective Comics with Batman on the cover getting knocked into a vat of acid by the Grim Reaper – yes, Death himself – but when you got home and read the damn thing, the scene’s not in the comic at all. The closest it gets to the cover scene is a brief fight in a paint factory with some burglars. What a rip-off!

The cover to this issue of Adventure Comics (starring Aquaman) is not that bad; while the exact circumstances depicted on the cover do not transpire in the course of the book, Aquaman and Aqualad are forced to fight in a gladiator pit by Black Manta and there is a trident involved. However, at no point in the book does Aquaman put on a dog leash, at no point does Black Manta give a big thumbs-down, and at no point are Aquaman’s calf muscles drawn larger than his head. By Neptune, look at the size of his legs! No wonder Aquaman’s such a good swimmer – his calves are freakishly huge!

The only other thing I want to say about the cover is that the Aquaman logo is fucking rad.

Man, I sure use italics a lot… I’d better take it easy with that shit.

This comic actually chronicles a big event in the life of Aquaman. Lots of important stuff happens that will have an effect on Aquaman comics for literally decades to come: Black Manta’s identity is revealed, Aquaman’s toddler son gets killed by Black Manta, and Aquaman and Aqualad break up. If this comic were published today the story would be “decompressed” and spread out over six issues but back in 1977 you got it in one issue, baby! For thirty-five cents!

The problem I have with Adventure Comics #452 is that it’s not a very good comic. You’d think that for such a momentous issue – the cover calls it "a novel-length sea-spectacular" -- they’d raise the bar in terms of quality. You’d think that, and you’d be wrong.

I’m going to dispense with the standard catty comments about Aquaman and what a lame superhero he is. It’s too easy, and frankly, I dig Aquaman. He never gets the props he deserves, so no snark for Aquaman. The comic book he’s in, however? That’s fair game.

This comic was written by David Micheline (of Iron Man fame) and penciled by Jim Aparo, workhorse artist of the 70’s-80’s. The basic story is that Aquaman is looking for Aquababy, who has been kidnapped. His search leads him to an undersea community of pacifists who have been taken over by mysterious purple SCUBA thugs. Here, at the beginning of our story we find Aquaman locked in combat with the purple SCUBA thugs (below). Help me out here; what is that one thug doing? I don’t know if you can technically dry-hump somebody underwater, but it looks like he’s giving it a shot: 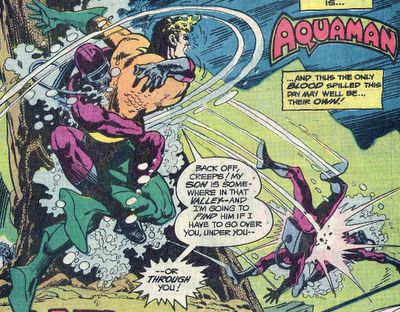 Aquaman gets captured and the architect of this whole evil plot is revealed: why, it’s his old foe Black Manta! I always loved Black Manta, ever since the Challenge of the Super Friends cartoon. He was like an underwater Darth Vader. I believe – and correct me if I’m wrong – that he was originally just called “Manta.” Frankly, Black Manta looks a lot cooler than he really is. 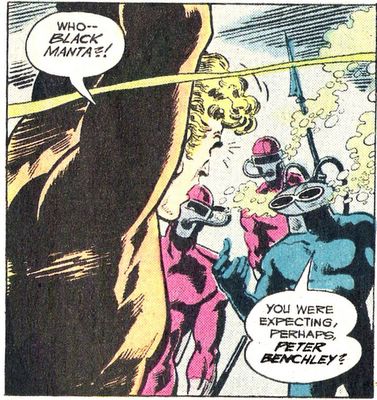 “You were expecting, perhaps, Peter Benchley?” Forgive me if you know this, but Peter Benchley is the guy who wrote Jaws. That is just lame 70’s aquatic humor. Black Manta loses two Cool Points for that.

But we’re not done yet. While he holds Aquaman prisoner – remember they’re underwater here - Black Manta holds forth about his grand scheme – he’s going to create his own undersea community for his people? His people? What’s he talking about? Manta pulls off his helmet and: 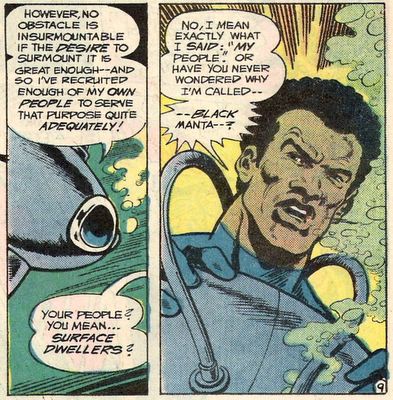 That’s right, he’s not called Black Manta for nothing! In one fell swoop writer David Micheline permanently fucks up Black Manta for all time. Instead of a power-mad undersea criminal, he’s now a hypocritical black militant who wants to enslave an entire community of undersea pacifists to serve their surface-dwelling masters. I don’t know, I always thought that was stupid.

Plus, he takes off his helmet for the big reveal and keeps talking to Aquaman – even though he’s underwater! His purple SCUBA thugs take off their helmets in the next panels, too. What the fuck? Black Manta, do you see the green bubbles floating around your head? That means YOU’RE UNDERWATER!!!!

It doesn’t stop there. Black Manta puts Aquababy in what must be a custom-designed Aquababy Killing Machine and forces Aquaman and Aqualad to fight, gladiator-style, in an arena surrounded by a force field. The Aquababy Killing Machine is a glass bubble filled with water that slowly starts to fill with air – if Aquaman doesn’t kill Aqualad, his baby is done for!

So, after a cursory apology to Aqualad (who he always calls “Minnow”), our hero proceeds to beat the crap out of him. Aquaman catches a lucky break – the force field goes down, allowing him to throw his trident (or “tri-pronged javelin” as Micheline calls it) at the Aquababy Killing Machine, destroying it. Here’s the dramatic panel:

I hate to nit-pick, but this climactic panel is sabotaged by a simple printing error; it's missing a few key words. Check out the red arrow. I think the caption is supposed to read: "With a feeble sputter of homeless energy the force field dies—" Maybe I’m being a dick about this, but damn it, the kids who shelled out thirty-five cents for this deserve excellence. Where was the editor? Where is the justice!?

Despite Aquaman’s best efforts, he’s too late. Aquababy dies. This is a BIG DEAL, an event that is frequently referenced in later issues of Aquaman and is the basis for Aquaman’s personal grudge against Black Manta – but it’s kind of glossed over in two short panels. They’re nicely drawn panels, but man, couldn’t they have slowed down and given Aquaman a whole page to be bummed out? That’s the two-edged sword of “compressed storytelling” right there. You get lots of plot for your money, but page space is so short that they can’t spare the panels to slow the story down for dramatic effect. Again, if this storyline were published today, we’d have an entire issue of Aquaman freaking out. I can’t decide which is worse. Isn’t there a nice middle ground?

Black Manta makes his escape, and as you might imagine, Aquaman is pissed. He gives his son’s body to a friendly octopus (?) and asks Aqualad to come with him and help track Manta down. Aqualad is feeling a little sore that Aquaman tried to kill him, so he petulantly refuses – he doesn’t even say he’s sorry about Aquababy’s death. What a dick. I think he’s just pissed that Aquaman’s been calling him “Minnow” all these years…

So there you have it – “Aquaman Disassembled” all crammed into one novel-length sea spectacular!

Man, I’m thirsty all of a sudden.
Posted by David Campbell at 6:53 AM

Great Review!
I always knew about these events (since they were the psychological motivation of Aquaman for the next two decades), but since I was born in 1977 my back issuses don't stretch back quite that far.

Keep up the good work, the highlight of my day at work is checking this site out at lunchtime.

Between your question about the possibility of underwater dry humping and trying to figure out what in the hell homeless energy is, exactly, this has to be your most thought provoking entry since the one about Turner D. Century. Admittedly, that was only thought provoking because I was wondering how many drugs led to his creation, but still. Good on you.

Wait: Black Manta is black? Really? Aquaman dressed his baby up like a little him? And called him "Aquababy?"

They sure are literal under the sea.

Even at the time (yes I'm that old) I remember being rather shocked they killed a frickin' BABY in a comic. Now that's cold. Seventies got nothin' on you, Identity Crisis!

How the hell were they all talking to each other if they were underwater?

Never could figure that one out...

Hmmm, I don't feel so much thirsty as I do nauseous. David Michelinie was good but he could really, REALLY miss the mark sometimes.

Aquababy is wearing Aquaman Underoos in a cunning peice of product placement. DC knew how to market things back then.

What infuriates me is that they reveal Black Manta is black just in time to make a baby killer out of him. Make Black Manta black, that's cool. But make him a black baby killer? That's just wrong.

Aqualad doesn't want to help avenge the death of Aquababy. See, this is why Arthur is such a jerk now. Imagine Robin not helping Batman after Ace dies. Or Etta Candy blowing off Wonder Woman for a bag of Hershey's. That's cold.

Thanks for reviewing this issue, it really brings back memories.

Man, I knew about the Black Manta kills Aquababy thing, but I thought it had happened a lot later, sometime when every other hero's girlfriend or family member got raped or stuffed in a fridge or something.

This really was a crap story wasn't it?

Black Manta's pose on the cover looks intensely uncomfortable. Try it if you don't believe me.

Brad got there first, but it merits reiteration: "homeless energy?"

There really aren't many black supervillains. That guy from the Wrecking Crew. Houngan. Man-Ape. Ummm...Hypno Hustler. That guy who dresses like a rooster. I think Firefly from the Batman comics is black.

Actually considering the competition Black Manta may be the best black supervillain ever.

Again, what is "homeless energy"? Can Aquaman control those who sleep on the streets, forming them into a macabre army akin to that in John Carpenter's seminal tramps-attack-a-church movie Prince of Darkness?

When writing dialogue, nothing evokes regality quite like, "Back off, creeps!"

C'mon- "homeless energy" is energy without a home! Do I have to spell it out for ya?

Moses Magnum is a bad mother....he's a complicated man and no one understands him but his woman.

"C'mon- "homeless energy" is energy without a home! Do I have to spell it out for ya?"

Hmm. Maybe not a story that was *quite* worth wrecking both hero and villain for decades...

and i can't even remember how i found this blog (following links about Crossbones? hmm), but i laughed. a lot.

Maybe I'm crazy, maybe it's a trick of perspective, but... in the panel where Aquaman is wrestling the purple SCUBA-thugs...

Am I losing it, or does that one background thug have three legs, one arm, and no head?!?!

So, I do not really consider it may have success.
steel buildings

Did you know that you can shorten your long urls with Shortest and make cash for every click on your short urls.

I just got a reprint of this in this month's collector box. Now I really can't wait to read it. :)

Anonymous said...
This comment has been removed by a blog administrator.
8:42 AM