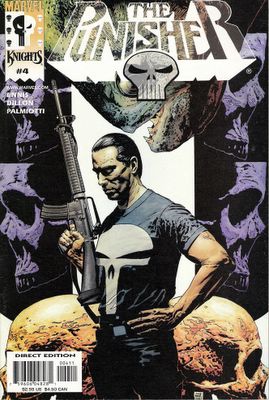 In a show of restraint, Marvel decided NOT to graphically depict a man getting his head swatted off by a polar bear in the pages of The Punisher (third series) #4.

Instead, the head swatting is done in a tasteful silhouette, with a WHAMFF sound effect. If it were me, I would have gone with a wet SHWOKK sound effect, but that's just my layman's opinion. For those of you who have not had the pleasure or reading The Punisher #4 and have wondered how exactly a guy getting his head swatted off by a polar bear would actually play out in a non-Avatar Press comic book, here it is: 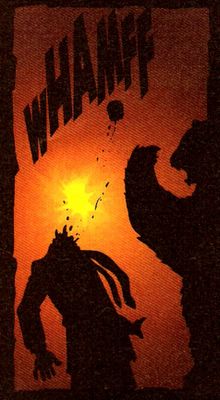 That is comedy. All that is missing is the bear yelling "boo-yah!" I think that would be even funnier. Or if it was a pirate bear.

The plot of The Punisher (third series) #4 is pretty simple: A squad of Mafia gunmen stalks a wounded and unarmed Punisher through a zoo. The Punisher turns the tables on the Mafia guys, killing them all with the help of his zoo animal friends. He dunks one of them head-first into a tank full of piranhas and they eat the guy's upper body down to the bone; he serves another guy to an inexplicably huge and aggressive anaconda or something; and he orchestrates the death-by-polar-bear of the remaining two. Throw in some subplot stuff and bam! You're done. The Punisher #4 has all the subtlety of a simultaneous crotch/throat grab: 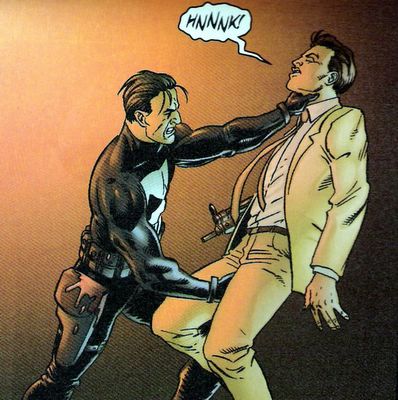 This is not to say that I don't like this issue - I do, I think it's a hoot. Why? Because people getting eaten by animals is always funny.

Violent humor was the name of the game for the third Punisher series. The character's popularity had waned since the Dark Age of Comics we call the 1990's, when every single fucking Marvel comic had The Punisher in it (or Wolverine or Ghost Rider or that dick Cable). It was too much - the guy was supposed to be a one-man war against crime, but he was showing up in Quasar and shit. It was too much. The Punisher's career tanked harder than Joe Piscopo's. After the pop cultural radioactivity had faded a little, Marvel decided to publish yet another Punisher series. This third regular series was the twisted brainchild of Irish writer Garth Ennis and artist Steve Dillon and their take on the title character was somewhere between Jason Voorhees and Bugs Bunny. Played for grim laughs, it was all about The Punisher killing people in a variety of exotic ways, with some grotesque supporting characters thrown into the mix. Unlike previous incarnations of the character as an obsessed but professional vigilante, Ennis and Dillon's Punisher really enjoyed what he did for a living - and what he did wasn't very pretty. Basically, he's a psychopathic killer who only kills "bad guys."

But you know what? He's our psychopathic killer, and darn it, we're rooting for him. I mean, setting aside the ethics and larger morality implied but never examined in Ennis's Punisher, you kind of have to take the character for what he is. Nobody expects Conan the Barbarian to sit down with his adversaries and reach a peaceful resolution to a conflict through dialogue -- you shouldn't expect The Punisher not to stalk and kill gangsters. And if he's going to do that, it might as well be funny, I guess.

Here's a goon getting jumped by The Punisher: 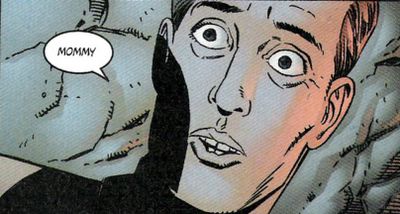 The big punchline of the book is when The Punisher lures the last two incredibly stupid gangsters descend into a polar bear habitat in pursuit of our hero - I mean our protagonist. The bears are docile and sleeping, so The Punisher hauls off and punches one of them in the nose, riling them all up. He escapes, leaving the hapless gangsters to face White Death: 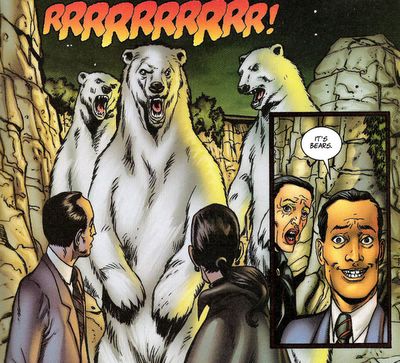 This is one of those stories that requires certain improbable things to happen in order to keep it moving. The goons who chase the wounded and unarmed Punisher have to split up so he can pick them off one by one. The Punisher can't ever get a gun in this book - if he does there's no reason to have his zoo animal friends kill the bad guys. Consequently, the first guy he kills drops his weapon in the piranha tank, while the mutant anaconda inexplicably takes the weapon of the second goon he kills. Then, in order for the big final gag to work, the last two gangsters have to suspend all reason and sense of self-preservation and climb into a polar bear exhibit.

I'm not complaining, because I thought it was funny and all, but I think you can see why I compared this to Bugs Bunny: it's funny, violent, and doesn't necessarily make a lot of sense.

UPDATE: I shamefully forgot to mention that the trippy Punisher-in-repose/piranha/skulls cover to The Punisher #4 was done by artist Tim Bradstreet, who rules.
Posted by David Campbell at 7:57 AM

Your site has quickly become one of my favorite sites!

Lines like this one make me snort out loud at my desk:
"Instead, the head swatting is done in a tasteful silhouette, with a WHAMFF sound effect. If it were me, I would have gone with a wet SHWOKK sound effect, but that's just my layman's opinion."

Cheers and keep up the great work!

Instead of having the whole head fly off, it should have just been the lower jaw. Then the guy could run around trying to talk. "Huhh muhhh, huhhhh muhhhhhhh!" That would be completely unlike anything Ennis has ever done ever.

"This is one of those stories that requires certain improbable things to happen in order to keep it moving."

Wait. And Ennis wrote it? REALLY???

"It's bears" is the funniest line ever written in a comic book EVER.

I remember that the image of the Punisher punching the bear in that issue made me laugh out loud as well.

"'It's bears' is the funniest line ever written in a comic book EVER."

What really makes it is the look of childlike glee on the mafioso's face. Which is yet more proof that Steve Dillon is great.

Dillon doesn't get nearly enough credit for his genius. You'd be hard-pressed to find anyone else working in comics today who gets body language and facial expression down so perfectly, though.

And then he can turn around and do terrific gore or monsters or other madness.

wait, wait, wait... is this the same steve "everybody looks the same, just with different hair" dillon i'm thinking of? at least he makes it easy to spot his work.

Ennis' Punisher has pretty much been the best few runs of this character in a long time. I didn't care much for the shennigans in the Confederacy of Dunces storyline or that one with the sewer critter or whatever but the MAX story arcs have been pretty good, and brutal. The Punisher is a truly frigheningly remorseless killing machine in this one, it's not just the regular Marvel series but with more blood and swearing. Yet Castle is humanized in small ways that don't feel forced.

Dillon was the perfect artist for the Bullseye: Greatest Hits mini, because the story is really told through facial expressions and Dillon is a master at that.

For me, the funniest bit in the series is page 1 of issue 9, which is just the Russian's fist slamming Frank in the face, interrupting is interior monologue.

you have a great way of drawing people into the world of comic books. i was never interested in them, didnt understand what the big deal was, but you make it interesting, and simple.

Well, you had to do it you bastard. You forced me to buy my first punisher comic in....in...well, let's just say it was so long ago I wore flannel and had a pony tail for cryin' out loud.

I tip my hat to you. This is good stuff. I love the issue afterwards where she's reading a "get well" card that has bears on it. I laughed out loud as she ordered a hit on "the animal that did this to me" only to have her dimwitted thug ask "you mean the bear?."

See, not that funny written, but when you toss in the earnest expression on the thugs face it turns into pure comedy gold. Good stuff.

Thanks to this blog I now know what the hell the Russian guy was all about in that terrible punisher movie.

You forgot the truly craptacular Marvel Knights mini-series where the Punisher was dead and he was off hunting demons or something.

He even had a second mini-series and shared billing with bone-claw Wolverine.

and yes, we have to remember this shite, because if we forget the utterly rancid fecal crap that was ghost demon Punisher we are doomed to repeat it.

Thus this is the fourth and not the third, and I think the writer on more than one occasion missed the point anyway. Issue 4 does not miss the point.

This entry reminded me of the panel in Scud the Disposable Assassin that shows Tom Smothers' severed head bouncing off a crate -- also in silhouette, a rare show of restraint for the Scud books.

There, the sound effect is "BOWM."

You gotta give props to a character that, even during one of his sucky phases, got the drop on Nick Fury.

I gave up on comics back in 2001; is Fury still dead? What about the Hellions? How about Uncle Ben?

I've got a brief letter about this issue in #6. I'm very proud.

Something cruel inside my brain makes me want to read the Angel of Vengeance issues of The Punisher. Probably some kind of yellow bug.

My brother will only watch movies where animals eat people. Actually any form of nature's wrath being inflicted on man will qualify, animals, tornadoes, tidal waves and the like....

This blog rocks so frickin' hard.

Someone should sell a T-shirt with the polar bears on the front and that "it's bears" guy on the back, with his word balloon of course.

G bob, it pleases me that you have bought your first Punisher comic. I want a royalty check or something from Garth Ennis.

Chris, I am keeping the angel of vengeance Punisher as my secret weapon.

Didn't they get some industry legend (Bernie Wrightson??) to illustrate the Punisher-Demon thing? What a waste!

Great blog Dave - I would be inspired to copy you if I had half your patience (and ability)!

Actually, as I understand it, Quesada and Palmiotti really wanted Wrightson to draw the Punisher, and Wrightson wanted to draw demons and supernatural stuff, and Golden and Sniegoski came up w/the demon hunter scenario. Which in theory sounded like a neat idea, but in execution...

I love your site. The Bear going "boo-ya!" has kept me laughing pretty much all day.

First time at your blog: it is the awesome. Can you help a girl out? I've read a lot of Punisher but am lost on reading order. I'm confused about Marvel Knights and Max and the war journals and all that ... where do I start and where do I continue?

Can you help me?