Continuing the festivities of Suicide Squad Fortnight, let’s take a look at some of the best lines of dialogue ever printed in the pages of Suicide Squad, a comic that has yet to be surpassed in terms of awesomeness.

Fellow Squad enthusiast Brian Cronin over at Comics Should Be Good was kind enough to host Part One of the Top Ten Suicide Squad Lines, and now we finish our bloody work here with Part Two.

Deadshot, the Suicide Squad’s smugly deranged marksman, is literal to a fault. He’s like an evil genie that will twist the wording of your three wishes into curses if you’re not careful - an evil genie with guns.

Here's the set-up: In Suicide Squad #22, batshit crazy Rick Flag intends to kill a crooked US senator in order to keep the Squad secret. Waller orders the Squad to keep Flag from killing the senator using any means possible. When Deadshot catches up with Flag and his soon-to-be victim at the Lincoln Monument in D.C., he executes his orders to the letter – by killing the senator before Flag can! D’oh! Then Deadshot nearly lives up to his name by getting shot like, twelve times by police – APE POLICE!!!

No, that would be stupid.

Later in a hospital, Waller asks the miraculously not-dead Deadshot what the hell he was thinking.

Waller: I didn’t mean by killing him yourself! 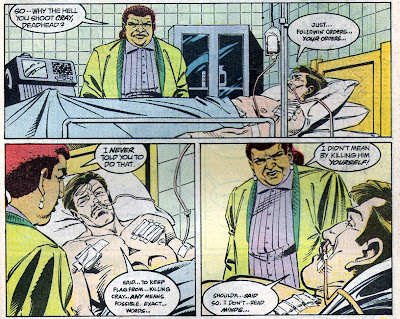 I like this simple Count Vertigo line from Suicide Squad #28, a chapter in The Janus Directive crossover. It’s just something the arrogant European noble would say, and it reminds me of Adam Ant. I love Adam Ant.

Anyway, during a big-ass battle, the Squad’s Count Vertigo flies up to lay a whammy on Peacemaker, who despite appearances to the contrary, is not wearing a bedpan on his head. 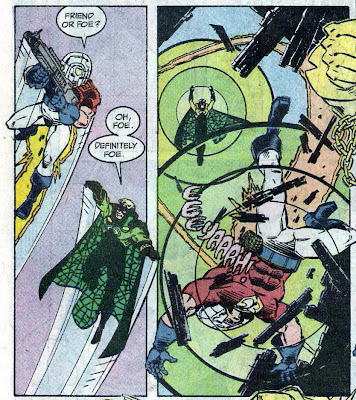 Aww, Bronze Tiger and Vixen used to be such a cute couple. It's too bad their lethal, paranoid work enviroment and his psychosis from years of assassin conditioning drove them apart. Nowadays there are treatment programs for ex-assassins, but back in the Eighties there wasn't a lot of professional help for guys like Bronze Tiger.

Anyway, before they broke up they were a handsome pair who would engage in playful banter whilst on deadly missions. 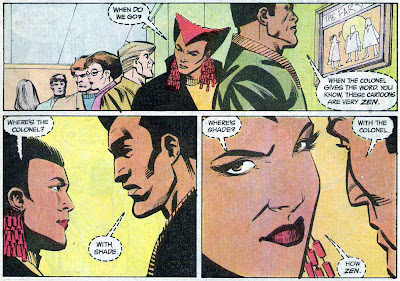 In Suicide Squad #18, Task Force X battles a reformed Jihad in Manhattan, with bloody results. As in their previous encounter, the Squad wipes out the Jihad big time - meaning they totally murder them dead.

Deadshot goes up against Jaculi 2.o, an upgraded mini-skirted version of the original Jaculi. Deadshot shoots her in the knee, which slows her down considerably.

"Kill me American," she says. "Or I will come back for you."

Deadshot considers this for a moment. Then - and this is mean - he shoots her. 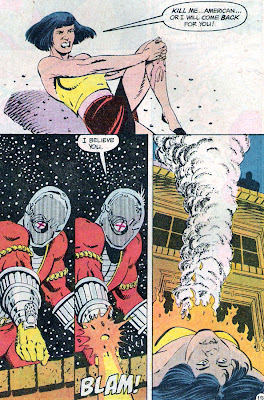 That is ice cold.

1. "Is there a plan or do we just shoot things at random?"

Be careful how you answer Deadshot's question because he will start shooting things at random if instructed to do so. That's just how he rolls.

Posted by David Campbell at 7:35 AM

Jaculis are pretty much like the drummers in Spinal Tap, aren't they?

Good choices, though you missed one of my faves. During "The Phoenix Gambit" arc, Deadshot gets hired to kill Amanda Waller, and one issue ends with the cliffhanger as he says, "Hello Mrs. Waller. Goodbye Mrs. Waller."

In the next issue, the Wall asks him how much he's being paid to off her, and gets some number. She says something like, "Is that all? Hell, I'm insulted. You should be too. Tell you what, I'll pay you that much plus a dollar to shoot him instead of me."

Floyd thinks about this for a panel and then says, "OK. Never liked him anyway," and turns and leaves. I always loved the "that much plus a dollar" line.

Much love for the Suicide Squad... I always had a feeling that Ostrander would select Squad members by flipping through copies of WHO'S WHO and picking whoever caught his eye. I loved that, and also the fact that he was writing FIRESTORM at the time and used the Squad to cull crappy villains from ol' flamehead's rogues gallery.

You could do the top ten lines *per issue* and hardly suffer any drop-off in quality or bad-assedness.

Suicide Squad's grandchildren, Checkmate and Birds of Prey, are both great, but neither has lines like these.

Dave, thank you for Suicide Squad week. I'm dying to hunt this series down. Are there trades, or am I stuck trying to fill holes with the single issues?

LOVE the blog, especially the Suicide Squad issues. I'll be picking up the Showcase Presents of these issues, and saving the wear and tear on mine.

I can't help but notice just how many of these lines come from Deadshot.

I am neither surprised nor troubled by this.

Also, I'm surprised that the Deadshot/Batman exchange, where Batman calls him on the fact that Lawton always pulls his shots around Bats, didn't make the cut.

Man, Ostrander's Deadshot was such a fascinating and messed up character.

I think I'll be digging out my box of SS issues and rereading tonight.

What I liked most about Suicide Squad was its non-powerful supporting characters: Murph, Economos, Father Craemer.

Murph had a lot of great deadpan lines. Like when he looks back to see a guy looking just like himself standing in front of him and saying "Hi Murph", and then there's a panel of the two just staring, and then you see him on the phone saying "Mrs Waller, Nemesis is here".

Well, it was funny a the time.

A great, definitely-no-longer-in-continuity exchange between the newly-debuted Oracle and Batman involved Barbara noting that it was unfair for Batman & Robin to know her identity but her to still have to be blindfolded before trips to the cave. Batman offered to unmask. Barbara grinned and said that now, if she really wanted to know, she'd just find out for herself.

Ostrander used Batman to great effect-- he was an important recurring guest star/ antagonist, it was always an appropriately big deal when he showed up, he was hostile to the Squad but for perfectly good reasons that didn't require him to be a psycho bat-jerk, and he was a scary bad-ass who nonetheless coul dbe stood up to (by Flag, Waller, Oracle, etc) when it really mattered.

Wasn't Grant Morrison a member of the Squad for a bit?

Yes, Grant Morrison appeared as "The Writer." It was during the War of the Gods storyline, somewhere pretty late in the Suicide Squad run. If memory serves, he was helping kill the bad guys by "writing their deaths into the story," but then he suffered writer's block and got offed.

(Not one of the real high points of an otherwise fabulous series...)

I don't suppose Suicide Squad fortnight will include anything about Suicide Squid? No? Well, that's probably for the best.

Amanda Waller's awesomeness made itself felt prodigiously in the Dini/Timm Justice League series. She both kicked ass and was touchingly saddened when Batman Beyond ruined her china set (jerk!).

What I liked most about Suicide Squad was its non-powerful supporting characters: Murph, Economos, Father Craemer. -- Don Paco


The supporting cast was amazing in this book, and it was the little bits that made the book more real.

I thought it hilarious that almost every woman at Belle Reve seemed to be one of Economos' ex-wives. And Dr. Simon LaGrieve always had the snap to put Waller in her place.

(By the way, all TRUE Suicide Squad fans should try to hunt down the The Belle Reve Sourcebook. It was a support book produced in 1988 for Mayfair's DC Heroes role-playing game, and at that time, DC editorial and Mayfair worked hand-in-hand, making much of the material as "official" as possible. The book included profiles of each Squad member written in character by a Belle Reve shrink, like Drs. LaGrieve and Herrs. There was plenty of good stuff there that you didn't get in the comics proper.)

"Also, I'm surprised that the Deadshot/Batman exchange, where Batman calls him on the fact that Lawton always pulls his shots around Bats, didn't make the cut."

Just another instance of Floyd's self-destructive behaviour. The JLI and the Squad are squaring off for the chance to rescue an ally from a Russian prison, and Deadshot and Batman pair up. Deadshot gets ready to shoot, but then Bats speaks:

"Don't waste my time, Lawton. Or don't you realize you always pull your shots when you face me?" (paraphrase)

After a pause, Deadshot says, "Go to hell" and walks away. Awesome.

Oh, and speaking of awesome, it's criminal (pun intended) that the Kanto-Vertigo scene didn't make the list.

Kanto has just dealt Vertigo a fatal knife blow to the chest and is talking smack to Amanda Waller.

In the background, we see Vertigo stir to life. He pulls the knife out of his chest and ... very ... slowly ... makes his way to his feet, behind Kanto's back.

Honourable mention: any scene with Vertigo and Poison Ivy.

I wouldn't be too hard on Suicide Squad fortnight, Dave hit us with a new post every day of the workweek. (A first I think). For which he deserves praise and maybe another yard of beef.

Couldn't have happened to a better comic. Oh and I second the sentiment regarding JLU and its appearances of both the Squad and Waller.

Now I feel like I've missed out on a guilty pleasure.

I may have a few tucked away in some longboxes from collections I've obtained from others.

If I come across them, while rooting through the boxes, I'll pull them out to read.

A bit sad that you don't have a post about the Nemesis/Nightshade/Flagg love triangle.

Which is complicated by Captain Atom's relationship with Nightshade and Plastique.

Also: you have to include the panels where Captain Cold freezes a dude to death for having the temerity to burn him alive.

Not to mention Cold's attitude towards Mirror Master the second....

And let's not forget the immortal:

"Where's Lawton?"
"Vertigo went off of with him - said they had unfinished business".
Final issue - final page
Deadshot & Veritigo.
Still one of the most awesome scenes ever.

Waller: There's no escape, Batman. We've got this place locked up tighter than a steel drum.

Batman: Would you like to know how many steel drums I've escaped from?

Incidentally, did Deadshot's "I believe you" come before or after Dark Knight Returns?

It is great to observe somebody put enough craze towards a matter. I'm thankful that I stumbled upon this process. I am lucky I used the time to read on past the 1st paragraph. You have got a whole lot to say, very much to offer. I really hope guys understand this and look into your page.

Anonymous said...
This comment has been removed by a blog administrator.
4:46 AM