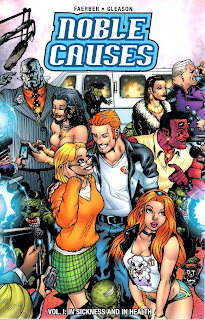 Sorry for the delay in posting, I was lazy/busy this week. Yes, busy and lazy at the same time - I am a human paradox machine! High Concept Week has dragged out over two whole Earth weeks, so I gotta wrap this shit up.

Writer Jay Faerber knows that if you want to be successful creating superhero comics outside the Big Two, you have to just go 100% high concept on everyone's ass. That's why Faerber has not one but two comics featured during High Concept Week; Noble Causes and Dynamo 5, both from Image Comics.

Let's start with Noble Causes. Here's the pitch: Ordinary bookseller Liz Donnelly marries into the Noble clan, a family of rich celebrity superheroes. She's immersed in a world of secrets, lies, ambition, and danger. It's a soap opera with superheroes! It's Dynasty meets the Fantastic Four! Or something, I don't know.

I've read three of Faerber's Noble Causes trades (available at Amazon) and I gotta say, he does a great job of unreeling dozens of parallel and interweaving storylines. The Noble family is full of scheming, beautiful people with super powers - except for Liz, our gateway character. When I first read Noble Causes I was sure that she would get killed off as soon as she hooked up with Race Noble, the superspeed stud. They meet cute, then start dating. She's doomed, right? She's going to end up in a fridge.

Not so much. *SPOILER* On their honeymoon in the South Pacific, Race gets killed in a random and Biblical way, and Liz is suddenly a widow... and a Noble.

Liz is actually kind of a cool character - she would have been played by Courtney Thorne Smith if Noble Causes was an early Nineties nighttime soap. She holds her own against her dangerously powerful and egocentric relatives and she sort of becomes the foundation of the series. Plus, she wears glasses - that's hot.

I enjoyed Noble Causes because when Faerber works in superhero or soap opera conventions like alternate universes and infidelity, the characters are so well defined that it's enjoyable to see them react the way they should. Do you know what I mean? Everyone's read a comic and thought, "Batman wouldn't gasp. Why do they have him gasping?" The reader knows how Batman or Wolverine would react, so it's fun to see them in parallel universes or have them get possessed and act out of character. Over time, Faerber has skillfully built up the Noble family as fleshed-out, familiar characters.

The same can be said about Dynamo 5, Faerber's newest book. It's in stores now and is definitely worth a look.

Here's how I previously described Dynamo 5:

"Dynamo 5 is the story of the teenage offspring of a big shot superhero with a Wilt Chamberlain-size libido and a Zeus-like proclivity for inseminating mortal women. Each bastard child of the (now deceased) hero inherits one of the hero’s many powers, i.e., super strength, eye beams, shape shifting, etc. and they band together to form a fledgling
super-team."

That about covers it. Dynamo 5 is fun pop art, with smooth colorful art, neat character designs, and some SHOCKING PLOT TWISTS!!! that I can't get into here. Plus - at the risk of sounding lecherous - it's got a cute super strong goth chick in a domino mask with a headband. That alone puts Dynamo 5 on my pull list. 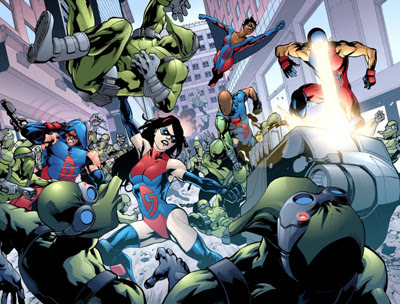 Posted by David Campbell at 2:02 PM

I really have to give a strong recommendation to Dynamo 5. It's a much smoother transition into the capes-n-cowl storytelling as he mixes the action and character development evenly.
If you grew up reading Claremont's X-men and the Soap-opera aspect doesn't scare you then the stories of these characters interpersonal relationships of Noble Causes will really entertain you.

I second the Dynamo 5 love, it's been pretty darn good so far.

I had to laugh - the villain in the left foreground of the Dynamo page looked, at a quick glance, like one of Howard the Duck's relatives getting busted in the chops!

Perhaps in the future, you should avoid putting 'lecherous' and 'pull list' in the same paragraph.

Or maybe it's just me.

My g/f and I are in complete agreement that the world needs more hot super-strong Goth chicks. Dynamo 5: Bringing couples together.

Spread the love! I've read Noble Causes since the beginning and it remains one of my favorite books each month. And Dynamo 5 has been great.

I've been a fan of Noble Cause since around the time of the 3rd miniseries. A friend of mine lent me those issues, and I eventually tracked down the trades and started with the ongoing.

I spent several months trying to resist Dynamo 5 -- I don't need to add more books to my pull list -- but finally picked up the first two issues last month. And I had to catch up. It really is that good.

Pretty good post. I just stumbled upon your blog and wanted to say that I have really enjoyed reading your blog posts.Any way Ill be subscribing to your feed and I hope you post again soon.

This won't really have success, I feel like this.
universities in Philadelphia | where is Prague | Campbell River real estate