High Concept Week rolls on like a futuristic inline skater in some crazy death sport with a look at one of my favorite comic book series ever: Ed Brubaker and Sean Phillips' Sleeper.

Here's the high concept behind Sleeper: Holden Carver is a double agent, a mole planted deep inside the global criminal network of Tao, a ruthless mastermind. Carver really works for the director of the I/O spy agency, John Lynch, who is the only other person on the planet that knows he's a good guy. Unfortunately,Lynch goes into a coma and Carver is left out in the cold, alone among the enemy.
I tend to gush rhapsodically about certain comic books and defecate on others, but read these words and understand: Sleeper is fucking awesome.
In Sleeper, writer Brubaker and artist Phillips create the seedy underworld of the Wildstorm Universe, a collection of superhero intellectual properties like Gen-13 and WildCATS that Jim Lee took with him when he moved shop from Image to DC and created the Wildstorm imprint. Most of the characters have superpowers of some sort, but there are no capes or tights here - this is a hardcore crime/spy story that skirts around the edges of the superhero genre. It's full of violent people who swear a lot and do bad things to each other. While swearing. So of course, I love it.
It's all in the execution, though, isn't it? High concept films or books or comics can always suck if not handled properly. Anybody read Congo? See the movie? It's about killer gorillas. How can you mess that up? Killer. Gorillas. It's a two-word high concept. Everyone loves killer gorillas! Despite the presence of killer gorillas, the final product somehow turned out to be lame. Same with Planet of the Apes, the remake.
But enough about the gorillas. 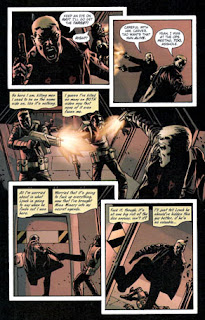 Sean Phillips perfectly capture a high-tech film noir sensibility with Sleeper. His art is dark and moody and drenched in shadows, and his layouts are master examples of visual storytelling. Phillips created an interesting visual theme for Sleeper- his panels float over one or two background panels on the page, if that makes sense. Look, there's an example page over there. He never tilts the thick-bordered panels, which are always rectangular or square. The panels cascade across the page, guiding the reader's eye. The end result are elegantly designed panel layouts that read well and don't call attention to themselves. Phillips' layouts remind me of a really dynamic movie storyboard.
Brubaker writes tough guy dialogue that doesn't sound self-conscious and he keeps throwing sucker punch plot developments at you and Holden Carver. Our hero is forced to do terrible things to maintain his cover as a top operative in Tao's sinister organization - and he's more than capable of doing terrible things.
Carver is super bad, a former Black Ops commando leader who was given a strange superhuman power by an alien artifact. He can't feel anything, but his regenerating body absorbs pain and can transmit it to others via touch. If you shoot him, he'll absorb the energy of the bullet, then while he quickly heals, he'll take the bullet energy and turn it into a sizzling electrical blast and mess you up bad. Or he will jump through the air sideways firing two guns at you, riddling you with bullets. Carver trained at the John Woo Academy. 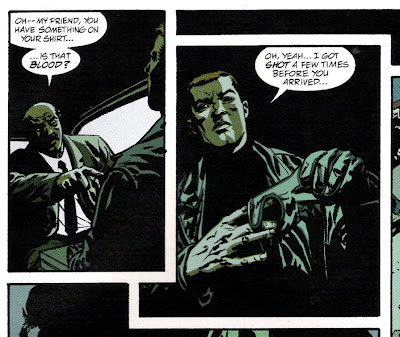 Tao has a few other lieutenants at Carver's level, including Miss Misery, a wicked evil assassin with a taste for pain. She derives pleasure and power from inflicting pain. Carver and Misery have a tumultuous and not entirely healthy relationship that plays heavily into the plot. She's super hot and totally evil and depraved. And he loves her. 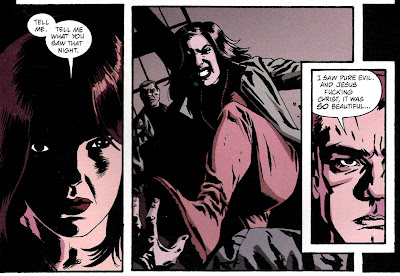 Tao himself was a character who first appeared in the superhero book WildCATS back in 1995, when Alan Moore was writing the book, so think of him as an Alan Moore character. Tao stands for T.actical A.ugmented O.rganism, meaning he's a genetically engineered supergenius. He is diabolically evil and supernaturally smart, one of those Hannibal Lecter types that can talk you into shooting yourself. The reader is always wondering how much Tao knows and what he's going to do when he inevitably finds out Carver is a traitor. He's creepy. 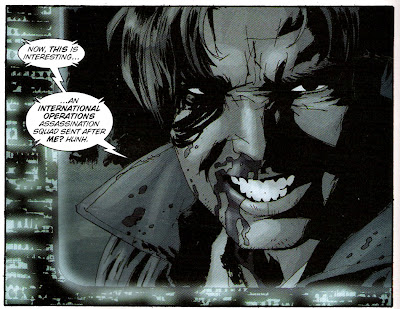 The whole series is a densely plotted, pleasantly complicated, perfectly paced descent into a glamorous and seedy world of spies and criminals. It's like a cocktail made of a few James Bond movies, a couple Raymond Chandler novels, the Hong Kong films Infernal Affairs and The Killer, David Mamet himself, and maybe Scarface, Deep Cover, Ronin -- add in a high concept and some grenadine. If that's your drink, baby, you have to get Sleeper. There are four trade paperbacks, you can get them on Amazon.
You will email me and thank me and praise my wisdom. 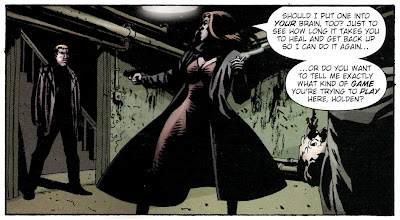 Posted by David Campbell at 4:45 PM

Word up to Sleeper being a great comic. Besides Starman, this was the most satisfying (and complete) story line I have ever read. The two "seasons" were my favorite read every month they came out and I am still holding my breath for Criminal to match it. What was the name of that third henchman who hated Carver? I can never recall but he was a great villain.

My favorite thing about "Sleeper" is that it's full of nasty specimens of pure human ugliness doing nasty, ugly things to each other, and yet you still end up feeling sympathy for characters like Carver and Miss Misery. It's like the early season Tony Soprano, really.

Actually, a lot of Ed Brubaker's books are like that. "Criminal" manages the same trick. And gee, look at that -- it's got terrific artwork by Sean Phillips, too. Those guys must know what they're doing.

Bru and Philips are one of the greatest teams in all of comics. They compliment each other perfectly.

And this series is wonderful for what it is -- so wonderful that I almost wish all the super-stuff wasn't in there so it could be shared with the masses as one of the greatest "undercover" stories of all time.

Trust me, "Serpico" ain't got nothin' on "Sleeper."

Before reading 'Sleeper', check-out the prequel, 'Point Blank'. No Sean Phillips art, but still fantastic. Also, check out Joe Casey's excellent run on 'Wildcats 2.0', where Phillips does another great job.

Word verification: lptgajsp, being short of breath and having a speech impediment.

I hope you're getting a kickback from DC buddy, because you just sold me.

John Lynch? The strong safety for the Broncos and formerly of the Tampa Bay Bucs? Is that why he is in a coma?

When Bru was on Catwoman, there was no title I looked forward to more month in, month out.
And then there was Sleeper.
After a lengthy comic book reading hiatus, Ed Brubaker was one of the people - especially with his work on Sleeper - who made me very glad that I had returned to the fold.
I'm really hoping that DC/Wildstorm give Sleeper the Absolute treatment.

Sleeper was a book I picked up on a whim before becoming a die-hard fan. Sweet Moses Malone, that first issue grabs you by the short ones and tears...in a good way.

Anybody who hasn't picked this on up needs to get on the ball.

This series was totally Airwolf. I bought all four trades at once, and had to use my left hand to turn the pages; otherwise it would have been over too quick.

In theory I'd prefer Sleeper without super-powers, like Josh. But then, we'd lose all the delicious metaphorical richness of Miss Misery's powers, and Carver's. Oh - and isn't the ending awesome? But let's not spoil it for newbies...

I agree, Dave. Sleeper was one of the best comics ever. It has the added benefit of telling a complete story, instead of dragging on forever.

Question: is Sleeper so steeped in Wildstorm lore that I, as a complete and utter non-Wildstorm fan, would not enjoy it as much?

See, I've read many a positive review of Sleeper, and I LOVE Sean Phillips' art and Bru's writing, but the whole trappings of the Wildstorm universe have kept me from trying this book out. I've never read a single Wildstorm book, don't care to, and don't know anything about its characters and mythos.

So, would I be lost, would I get a medium level of enjoyment, or would it still be completely Airwolf?

I too had zero exposure to the Wildstorm universe, I think, prior to, and since, Sleeper. It is still Airwolf.

Yeah, I'm a bit disappointed in you, Dave, for not mentioning Point Blank, which shows how Lynch got in the coma in the first place, and it's as nasty a book as Sleeper is, with a better TAO. Also, Colin Wilson on art, which means it holds its own against Phillips' pencils. So there are really FIVE trade paperbacks in the series.

I liked Congo (the book, not the movie). I mean, come on: killer gorillas!

I read this review then went and bought the comics - now I'm having to make room in my top 5 favourites list for it - Do I let The Dark Knight Returns go, or do I knock Leviation off? I don't want to decide.

I have read comics for over 10 years, some have been dire and some good, a small handful out of the mass read by myself have been truly awesome, and SLEEPER still stands out in those few milestones as the greatest. If you want to be entertained and provoked in all the good ways in which a comics can buy this!

Brubaker and Phillips are by far the best story tellers out there, in my opinion.

I cant wait for the movie!

tn chaussuresEnter the necessary language translation, up to 200 bytes winter, moves frequently in China, nike chaussures showing that the deep strategy of the Chinese market. Harvard Business School, nike tnaccording to the relevant survey data show that in recent years the Chinese market three brands, Adidas, mens clothingpolo shirts Li Ning market share at 21 percent, respectively, 20%, 17%. The brand is first-line to three lines of urban competition for mutual penetration. Side of theworld,announced layoffs, while China's large-scale facilities fists. The sporting goods giant Nike's every move in the winter will be fully exposed its strategy. Years later, the Nike, Inc. announced the world's Fan