I don’t remember what blog I was looking at the other day, but I came across a comment from CBR’s Augie De Blieck, one of Dave’s Top Five Favorite Republicans.* Augie mentioned artist Jerome K Moore and how he doesn’t seem to get a lot of work in comics these days despite his awesomeness and how that’s a damn shame.

After some admittedly half-ass Googling, I found that Moore did some inking work in various titles, and recently did a JSA trade paperback cover, but other than that, not a lot. I’m hoping/guessing that Moore is alive and well and is working in fields other than comics. Some times we geeks forget that it is possible and indeed desirable for comic artists to work in other industries. Let’s face it, unless you’re one of the big dogs, you’re never going to get filthy rich drawing comics. The pay is better in the Real World.

So I’m hoping that Jerome K Moore is alive and well and pulling in a fat paycheck doing concept art or advertisements or something like that, because the guy is a frickin’ ninja!

I’m basing my opinion solely on the run of remarkable covers that he did on DC’s Star Trek comics during the nineties. Holy shit, those covers rule. Take a look at the cover for Star Trek: The Next Generation Annual #2. Moore manages to make Riker look more like a stud and less like Wolfman Jack, something that could never be accomplished onscreen. 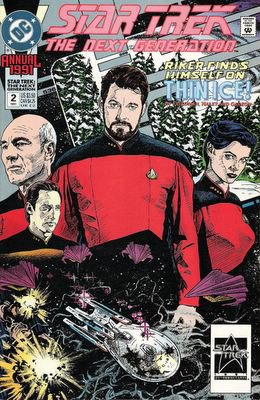 The great B-movie producer Roger Corman said that one of the most important elements of his direct-to-video films was the DVD and VHS covers. Once you get somebody to pick up, say The Arena based on the cover, it’s almost incidental as to whether they actually like the film. You got their money; mission accomplished.

The same goes with comics, really. I’m sure that there are many who would disagree (because they’re stupid), but covers help sell comics. Jerome K Moore’s excellent cover art enticed me into buying more than a few Star Trek comics despite my better judgment, and more often than not, the interior contents did not live up to the promise of those wonderful covers.

Check out this cover from Star Trek #26. It’s what we would call an “iconic” cover nowadays because it really doesn’t illustrate or even hint at the actual story inside, but rather it is representative of the series as a whole. 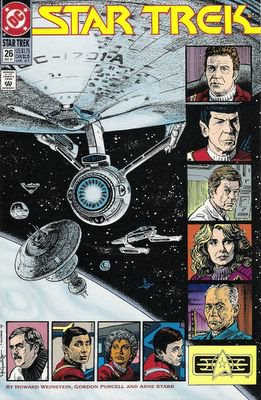 One could criticize Moore’s covers for being overly photo-referenced, but I would argue that in this unique case, when you’re trying to capture the look of the Star Trek actors, a little photo-reference isn’t a bad thing. I think the tight line work, the composition, and the clever design of these covers speak for themselves. If only more artists put as much energy into the design of their covers as Jerome K Moore does, the world would be a happier place.

Thus ends my song of praise for Jerome K Moore, one of the more under-appreciated artists working in comics. I raise my proverbial glass of scotch to Moore, and hope that he’s raking in the cash working in fields where his true awesomeness is appreciated. 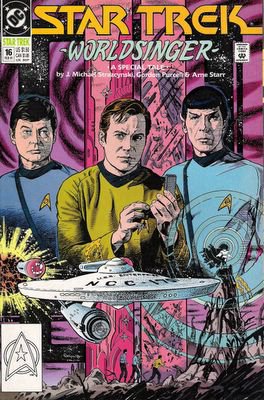 * My other four Favorite Republicans: Abraham Lincoln, Teddy Roosevelt, Ben Stein, and Chris Arndt - although Chris may be a Libertarian, I can't tell. If he is, I'll replace him with, I don't know, Sen. John McCain.
Posted by David Campbell at 5:51 AM

I had to work real hard to pick just one JK Moore cover in my recent Comics Cover Trek-stravaganza.

Him did good product.

Thanks, Dave, on behalf of both Honest Abe and myself. I'll let Chris speak for himself.

Moore inked TRANSMETROPOLITAN #1 before leaving comics for religious reasons, according to Warren Ellis.

Whatever the case, the comics world is poorer for his absence. He did illustrate a couple of short stories for Malibu during their Ultraverse days, I believe. Never went any furth than that. But, really, it was his unbelievably gorgeous covers that stood out from the crowd. I was happy with just those. I'd pay good money for ABSOLUTE JEROME K. MOORE COVERS.

Really--religious reasons? That's very interesting. Does anyone know anything more?

And yes, I want to hear more. Is he a Hare Krishna now? Zoroastrian, maybe?

Don't know anything further about the religious reasons. Maybe he just didn't want to work on that type of material.

Similar reasons led FREAK FORCE's Vic Bridges to run screaming from comics at around the same time, too.

Nice to see someone give JKM props.

I think the only JKM interior art I've seen is on the pre-Crisis Green Arrow back-ups in Detective Comics. 99% pure gorgeous, some points off because it was a little stiff and because (I presume) he designed Onyx's awful costume.

I don't know that I would buy an Absolute Mostly Star Trek Covers, but I'd definitely go for some JKM Artbook action with a larger variety. Or any new comic work from him, really.

I feel stupid now because I wrote something up on my blog in the last month or so that mocked a comic retailer for trying to sell me a title based on it's cover. But I do agree that the cover is important to swaying somone to pick it up, or at the very least, get noticed on a packed shelf.

Gotta run to the video store now and get The Arena.

Really--religious reasons? That's very interesting. Does anyone know anything more?

The important question is, is there hope of Rob Liefeld being converted to that religion???

For whatever reason, that CBG link was dead. The comics.org URL for Jerome Moore is : http://www.comics.org/search.lasso?query=jerome+moore&type=penciller&sort=alpha&Submit=Search

Interesting that you picked the Worldsinger issue of Star Trek to feature. I believe that and a Teen Titans issue are the only comics work J. Michael Strackzynski had done prior to his Babylon 5 fame, and his subsequent writing of every other Marvel title.

I do wish that Mister Jerome K Moore would draw me! He would do justice to my fine, chiseled features, yes he would.

First, I thank you for the title, the recognition, and the pleasent regards.

Second, I take you to task for being derogatory of Gordon Purcell and/or his art.

PS you have disqualified yourself from a share of Mister Purcell's "Who Wants to be a Millionaire" kaboodle.

IIRC, Moore objected specifically to inking the strip club scenes in the first arc of Transmetropolitan, and not the hackeneyed sub-Counterpunch politics of the book. ;-)

I remember thinking that I could read Transmet all the time if not for the language.

I remember just thinking it sucked and that I hadn't bought it for those cool Jamie Hernandez covers.

Why has Dave Campbell not posted today? Antonio, he is not happy, as he spent the time to post before going to make his hands more handsome.

Antonio waits at the airport for the private plane to get the final check-out or check-up or the whatever. Antonio has been told that he can have no more nice drinks in the lounge.

This makes me think of my comics pro friend, who tried out with other artists to do a Star Trek NG comic, but the actors had approval on their likenesses.

I can imagine this plummy British voice saying "my head is not shaped like a turnip!"

Photo ref is the only way to keep safe in these cases.

Jerome was a senior animator at Warner Brothers until last year. I believe he freelances now.

JKM is currently inking WORLD OF WARCRAFT for WildStorm.