Kobra is an adherent to the Darth Vader paradigm of personnel management. He has a "top heavy" managerial style, holds high expectations for his staff, and values loyalty. Kobra helps his workforce achieve their goals by mentally conditioning (aka "brainwashing") them to adopt his professional values as their own. Understanding the importance of morale in the workplace, Kobra uses fear and intimidation to keep his workforce focused. 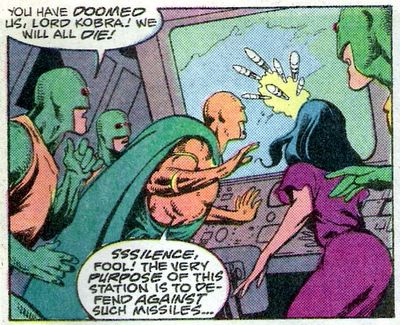 In the inevitable situation where workplace stress produces undesirable behavior such as cowardice or mistakes, Kobra knows that addressing the situation as soon as possible, and in a public way, is the best course of action given his management style.

In the panel above, we see one of Kobra's staff expressing some doubts regarding the enterprise's course of action. Since they are in a time-critical environment, Kobra wisely chooses to address the issue at hand - incoming nukes - before dealing with the coutner-productive behavior.

Only after the time-critical situation has been dealt with does Kobra address the employee's behavior. A mature manager knows that the key to success is prioritizing; Kobra dealt with the most urgent situation first, and now turns to the personnel matter in the panel below. Note that not very much time has elapsed since the employee manifested undesirable behavior - corrective coaching is only relevant when done in a timely fashion. 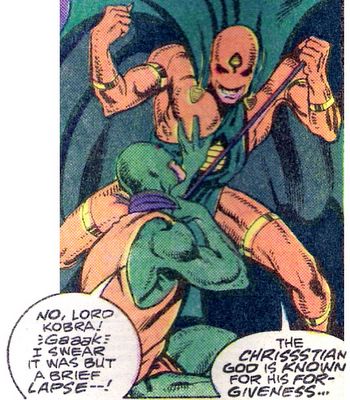 Kobra chooses to correctively coach the employee by strangling him to death, thereby eliminating the possibility of the undesirable behavior from occurring again.

Note that Kobra has coached the employee in a firm way in front of other staff members, both as an example of the consequences of counter-productive behavior and as a way of reinforcing the desired company culture. 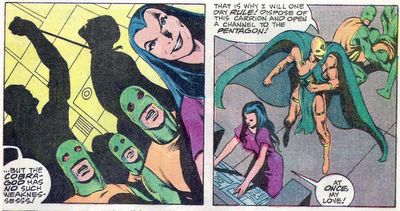 Note the response from 3 out of 4 employees is fear/intimidation, while 1 out of 4 employees responds with sexual arousal. These are acceptable responses to witnessing coaching sessions like this, and are signs that the workforce will comply in the future. Kobra's corrective action seems to have had the desired result.

To reinforce his "top-heavy" management style, Kobra concludes his coaching session with a declaration of supremacy: "That is why I will one day rule!" He then further reinforces the corrective action by instructing the deceased employee's co-workers to remove his corpse.

Please note that the Darth Vader paradigm is only really effective when a) you have a large pool of employees, and b) you are physically capable of murdering your staff.

(Art by Alan Davis from Batman and The Outsiders #27)
Posted by David Campbell at 12:34 PM

yes, but how are his time-management skills?

Who do I write to to get a version of The Office with Kobra in the David Brent role?

Is that some Alan Davis art? The chick with the bangs is total Davisian.

The Office with Kobra would rule. Quoting Monty Python with that hissssss. Doing the Dance. You know the one.

Kobra's been reading the One Minute Manager, apparently? Man, that is one efficient would-be dictator. Now if only it didn't take him a half an hour to say TPSSSSSSSS Reportssssss.

"Is that some Alan Davis art? The chick with the bangs is total Davisian."

Yeah, I neglected to mention that the Master Himself drew this issue - I put a little note at the end of the post

wow that girl really likes seein' a dude get chocked.