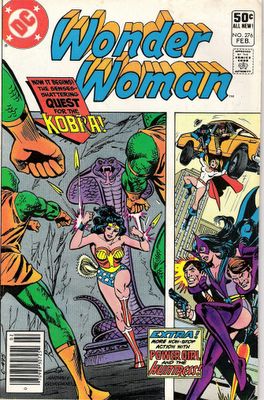 If there's one thing you can say about Wonder Woman comics of the 70's and 80's, it's that they are no damn good. I don't know what happened, but somewhere along the way Wonder Woman morphed from creator William Moulton Marston's naughty lesbian bondage queen into a generic, androgynous super-hero. Her gender is almost irrelevant in these comics, which, depending on your point of view, could be a good thing. I'm here to tell you that it isn't.

Here’s Wonder Woman #276, which is included in Kobra Week because it’s the beginning of the “senses-shattering QUEST for Kobra!” Published in 1980, this is the pre-Crisis version of Wonder Woman; you can tell because a) she flies in her invisible jet, b) she has a secret identity, Capt. Diana Prince, and c) she looks like a DUDE!!!

In this story, Wonder Woman uncovers a sinister plot by the doomsday Kobra Cult, a shadowy organization that has been the cause of her recent woes. They Kobra Cult plans on hijacking a super-nuclear bomb from the top secret Cobalt 93 project and fucking shit up big time (my words, not theirs). The leader of the cult is none other than King Kobra, a fun pre-Crisis version of Kobra.

Regardless of the name, we know it’s our man Kobra. Who else dresses like that? Who has the balls to pull of that pimp Kobra Vibe? Check out this panel of King Kobra striding through his crib – the Kobra Vibe is in full effect here! 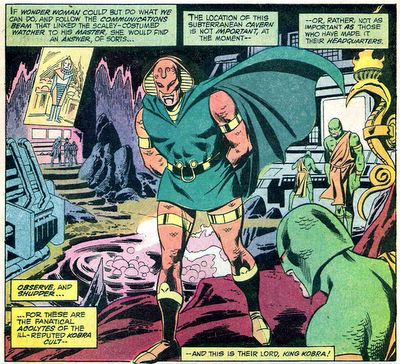 Kobra stays in the background during this issue, leaving Wonder Woman to fight Kobra’s minions. The Kobra Cult is the DC version of HYDRA, basically – a never-ending font of generic goons who spill forth whenever the plot demands a fight scene. Goons like this are as incompetent or as dangerous as the writer needs them to be – for instance in this issue Wonder Woman fights a single Kobra goon and has a hard time, but ten pages later she wipes the floor with a whole squad of the same guys.

Wonder Woman has awkward dialogue and a deeply illogical thought process to match her stiff, featureless physique. She has a weird habit of narrating everything that is happening during a fight. It’s like she is high or something. Here she is in battle with a Kobra goon: 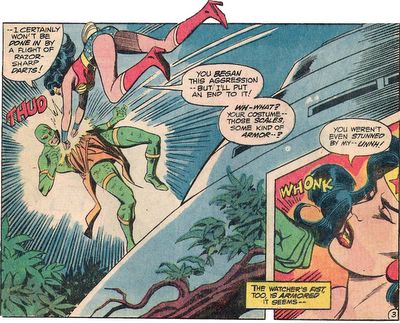 Later Wonder Woman dopes out the location of a secret Kobra Cult lair: in Carlsbad Caverns! She flies her invisible jet into the caverns themselves (!) and quickly finds the location of the secret lair: it’s the only cave that has a big fence and a CLOSED sign. I’m serious.

Beyond the fence in the middle of Carlsbad Caverns, Wonder Woman finds a secret Kobra lair full of high-tech stuff and Kobra Bling like snake-motiff torch holders and shit.

The hideout is deserted – perhaps their security was compromised by one of the 250,000 Boy Scouts who visit the National Park every frickin’ year – but the wily Kobra has left some goons behind as a trap for the Amazing Amazon! But, if you hadn’t figured that out, Wonder Woman explains it to you as she is attacked:

This issue is presumably a big lead-up to a showdown between “King Kobra” and androgynous mannequin Wonder Woman; I just don’t happen to have any of the subsequent issues. I’m sure it’s great – after all, if it has Kobra, it must be good!

Right?
Posted by David Campbell at 8:29 AM

I've always wondered about Hydra and the like; if they all have to wear such ridiculous costumes when on the job, wouldn't it make it really easy to track them down, making them a rather unsuccessful secret society?

I mean look at the Kobra Kult; you've got blokes wearing green chainmail and orange togas. If twenty of them got on the bus to go to work in the morning, you'd suspect something was up, wouldn't you?

I seem to remember Marvel planning a series about a blue-collar employee at AIM; it would be a comedy series based around his average workday, with the twist that he worked for an international terrorist agency and spent his day building weapons to kill Captain America. I don't know why it never surfaced.

You've gotta name names in your reviews man. Who was responsible for this mendacious atrocity so we (and by we I mean us) can hunt them down, tie them up, and attach electrodes to their skin?

In the latest MAX limited series Fury, Nick Fury met an old Soviet acquaintance of his who had a similar job in the Soviet war machine.

This guy - Rudi - mentions that Hydra was USSR's answer to SHIELD.

My bad! Gerry Conway wrote that book and Jose Delbo & Joe Giella did the art.

Anonymous said...
This comment has been removed by a blog administrator.
12:31 PM

I'd love to see that AIM series too. Hydra is the shiznit. A worldwide terrorist organization run by an old Nazi baron, with an offshoot R&D division that builds reality-warping cubes and an evil robot head? Marvel was truly the House of Ideas back in the day. One of my dream projects, should I write comics, would be a modern-day riff on Steranko's SHIELD run, with Nick Fury trying to take down Hydra with Dum-Dum, the Contessa, Captain America, an X-Man or two, with the Sharon Carter and the Black Widow deep undercover and Elektra wooed by both sides, all in a James Bond-meets-Sleeper-by-way-of-Suicide-Squad vibe. And I'd have guys like the Red Skull, MODOK, Baron Zemo, the Fenris twins, and the Serpent Society show up as well. Kinda like SECRET WAR, only...y'know...better and on time.

I would buy that, Cove. Get to work!

"I seem to remember Marvel planning a series about a blue-collar employee at AIM; it would be a comedy series based around his average workday, with the twist that he worked for an international terrorist agency and spent his day building weapons to kill Captain America. I don't know why it never surfaced."

You're thinking of Joe A.I.M., a pitch by Micah Wright and Rick Remender for Epic that didn't get picked up by Marvel, which only became known after Wright threw a belligerent hissy fit because Quesada didn't know he had worked in animation writing.

Is it me, or does WW look cross-eyed in that last panel with the darts flying at her? I don't think I've ever seen such an unattractive depiction of her.

On another note, I hope the Suicide Squad issues with Kobra and the JSA story on Blackhawk Island are included this week. Those two stories alone make me a Kobra booster. Of course, they will be hard to mock...hmmm. I'm sure if anyone can do it, Dave can.

Joe AIM. That's the one. Behind the scenes shenanigans aside, it sounded like a great idea.

For someone who has never read a comic book, where would one start?

Of course, the DC Universe had a few too many of these secret societies. In addition to the Kobra Kult, there was also H.I.V.E., the 100 (later the 1000), and the 2000 Committee [who's plan to take over the world by the year 2000 was somewhat less that successful]

Obviously what these other groups lacked was the stirling leadership of King Kobra.

I'd also have to throw the League of Assassins, Intergang, and SKULL into the mix. I want a super gang war mini-series with all these people.

And the Cult of Brother Blood, the nameless hoods of Intergang, Checkmate...

And why is it that these secret societies are usually led by the most backwater villains one could possibly imagine? Who goes to an AIM recruitment meeting and says, "Gee, that floating head MODOK guy is my idol! I wanna join his buckethead society!" Or thinks it's a good idea to join a religion led by a wild-eyed psycho named Brother Blood? Or would take one look at Stryfe's windsailing helmet and decide he's just the guy to take over the world for mutantkind? Aren't cult leaders usually...charasmatic? Or midly attractive? Or, I dunno, have necks? Looking at all the choices out there, if I were wanting to join a secret society, Kobra wouldn't seem too bad a guy to follow.

What's the big deal with WW noticing that the armor and scales were all wrong when worn together and not as separates?

Well, except for the timing.

Jose Delbo! That would explain it. The worst Transformers artist ever!

Kelvin: AGREED. What was with all those fey hand movements the Autobots kept making?

What do the Amazons call that attack WW uses on the lone Kobra guy, anyway? The Flying Doggy Style Punch?

Color me less than enthused at the prospect of a Power Girl/Huntress backup feature. Sure, that kind of thing works for Superman/Batman, but that's because it's The Goddamn Batman paired up with the godlike alien. Sticking the pre-Crisis Huntress and the pre-Crisis Power Girl together just looks like they were trying to make the list of Most Lopsided Team-Ups Ever.

She doesn’t look androgynous to me. I don’t see it.

What?! Delbo was the second-best artist ever to work on Transformers, after William Johnson!

A great deal of effective info for me!