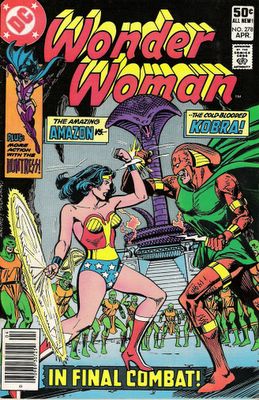 I spent way more money on this comic than I should have, but I simply had to have it. After reviewing/mocking Wonder Woman #276 as part of Kobra Week here at Dave's Long Box, I was dying to see how the whole storyline played out. Here, then, is the senses-shattering climax of The Kobra Saga!

An aside: I don't know who came up with the phrase "senses-shattering" that propped up on so many comic book covers and in promotional copy back in the day - probably Stan Lee. During the Silver Age it seems like every frickin' issue would shatter one's senses. "It begins here! The senses-shattering introduction of Captain Carrot and his Fucking Amazing Zoo Crew!" Even as a kid I became a little jaded towards this particular bit of hyperbole. I'd put down a comic book and think, you know, big deal. The Thing fought The Hulk again. "Yawn-inducing" would be a more accurate bit of copy for many supposedly "senses-shattering" issues.

And really, what does that mean? Has anybody ever picked up, say, Wonder Woman #276, which is described as "senses-shattering" on the cover, and had their senses literally shattered?

"AAAGH!!! I can't see!!! This comic was so awesome it fucking blinded me! My God, I can't feel my feet either! Or my bathing-suit area!!! Fuck! I have totally had my senses shattered by this comic!!! Gaaahhh!!!"
Right, enough of that. Let's talk Kobra.
"...be on the lookout for a tall dude with a wig dressed in a bathing suit..."
Writer Gerry Conway and artists Jose Delbo and Mike Hunt - sorry, Dave Hunt - must hate Kobra, because they make him look like an utter idiot in Wonder Woman #278.

As you may recall from previous issues, Kobra has managed to steal a powerful "dirty" nuclear warhead from the U.S. government's top secret Cobalt 93 project. Undetected by the Egyptian government and the thousands of tourists who visit daily, Kobra has built a "secret" missile silo inside of one of the great pyramids of Cheops. Kobra has a thing for setting up bases in really obvious places - in previous issues he had an entire secret base hidden inside Carlsbad Caverns in New Mexico that miraculously went undetected as well.

Anyway, Wonder Woman figures out that Kobra and his minions have this vast complex inside the great pyramids - I don't know, maybe they lifted the top off one of the pyramids and lowered all their gear and ICBMS into it one dark night when nobody was looking. She travels to Egypt, enters the pyramids, and is promptly captured.

Actually, she lets herself get captured because Kobra's goons don't recognize her. She thinks, "By their accents, they're not Americans - they don't know who I am! ...I think I'll play along with these cultists for now."

WTF? Do Kobra cultists never read a paper, or watch the news? I could see how they wouldn't, but at the very least you think Kobra would mention Wonder Woman - the thorn in his side - to the guys guarding his secret base! You know, tell them to be on the look out for a tall dude with a wig dressed in a bathing suit? But no.

The cultists bring Wonder Woman before Kobra himself, who is wearing a really goofy looking version of the Kobra Outfit. Kobra assumes that she has been drugged. Bad call.

The countdown has begun. Kobra will fire the Cobalt Bomb over the Middle East, and, as Wonder Woman helpfully explains, "...if that missile hits, it will poison the Mid-East oilfields for the next 93 years! Civilization will be thrown back to the Middle Ages!" I don't know if Kobra's really thought this plan through - he's firing a super-nuke at the Mid-East from a secret launching spot in... Egypt? Maybe he checked to make sure the prevailing winds were blowing east or something, but that seems sort of like throwing a grenade straight up in the air and hoping it doesn't land on you.

But what do I know? I'm not the King of Evil.

Kobra has a bright idea - throw Wonder Woman in the blast pit! He tells his lackeys to do this, despite the fact that there are only fifteen seconds until ignition. They'd better hustle!

However, Kobra has underestimated the Amazing Amazon and she bust loose! 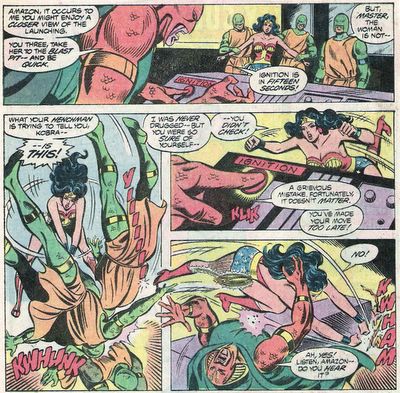 Things go terribly wrong for Kobra. Steve Trevor, the love of Wonder Woman's life, has climbed into the Cobalt 93 missile and has pulled out some important wiring - now the missile's turn signals and windshield wipers don't work for shit. Wonder Woman smashes a lot of expensive equipment and pummels a bunch of goons, then grapples with Kobra, who strangles her.

How do we know Kobra is strangling her? Well, you could look at the art, or you could read the helpful internal dialogue by Wonder Woman, Mistress of the Obvious: "Strangling me!" 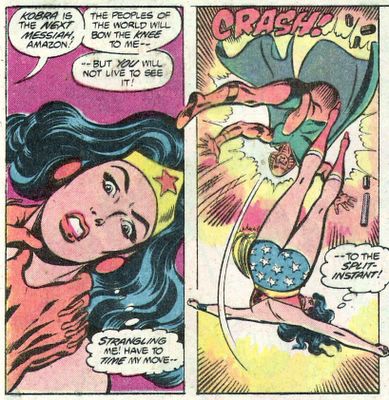 She kicks Kobra into some vital machinery, giving everybody a good look at her sexy Grandma Panties. Look, I'm not saying she has to go all Brazilian on us and wear a thong or anything, but couldn't she have picked a more flattering cut for her trunks? Maybe Wonder Woman is one of the 2.5 million women in America who suffer from adult incontinence and her Grandma Panties actually function as adult diapers. I don't want to start a rumour or anything, I'm just thinking out loud here.

In the end the Cobalt Missile goes off course and lands harmlessly in the ocean, one of the great pyramids totally collapses, and Kobra is presumed dead, crushed under tons of ancient bricks.

Happily, both Kobra and Wonder Woman eventually get cooler clothes, so everything works out.
Posted by David Campbell at 2:47 PM

It is obvious that you can communicate throught the Multiverse with the hero known as the Velvet Marauder.

The how is not important to me ... at present.


This man has not updated his blog for some time.

The aforementioned blog was King Kobra's most entertaining diversion.


Should he fail to update his blog soon, King Kobra will strike at you, Dave Campbell. Your demise will be unimaginable to you. Longer and far more terrible than your worst nightmares. Inescapable.

You now have a focus for your intellect. A blind singleness of purpose. A slim chance to keep your - otherwise drab - existence in the groove of life.


Perform the task for me. And live.

It is obvious that you communicate through the Multiverse with the man known as the Velvet Marauder.

The how is not important to me ... at present.


This man has not updated his blog for some time.

The aforementioned blog was King Kobra's most entertaining diversion.


Should he fail to update his blog soon, King Kobra will strike at you, Dave Campbell. The process of your demise will at first seem impossible. Longer and far more terrible than your worst nightmares. Inescapable.

You now have a focus for your intellect. A blind singleness of purpose. A slim chance to keep your - otherwise drab - existence in the groove of life.


Perform the task for me. And live.

Edit: the fool who typed the first comment is now replaced. Kobra does not tolerate imbecility.

My senses got shattered once by accidentally picking up a Rob Liefeld comic. GodDAMN, that hurt. I still have trouble peeing.

Yeah, they don't use "senses-shattering" any more after the landmark Horowitz vs Marvel case of 1979 in which young Jeph Horowitz of Long Island suffered severely fractured corneas as a result of reading Marvel Comics Super Special #13. Marvel settled out of court for an undisclosed sum, and clamped down on any senses-shattering action in subsequent comics.

So what, if she'd been momentarily distracted and missed her window, she would have just sat there and let him strangle her?

Before there was an internet to break, you had to shatter people's senses the analog way...

Oooh, a tie! Kelvingreen and Jason both win

She thinks, "By their accents, they're not Americans - they don't know who I am! ...I think I'll play along with these cultists for now."

My take on it is that she's simply echoing the "arrogant American" viewpoint. Read it like this:

She thinks, "By their accents, they're not Americans - so WTF do they know, they probably don't even know who I am! ...I think I'll play along with these foreigner cultists for now."

So you can imagine as she's fighting the cultists, she probably has her voiced raised because, as everyone knows, one's heightened volume increases another's ability to comprehend English....

According to this story the Kobra cult originated in India as an association of indian fakirs who ended british rule in India. And yet every member we see is fair skinned.

I recently covered this whole period in my Wonder Woman commentary so if you want to see more then follow my link.

I read this issue and I wasn't able to smell for a week. So, for me, it was only "sense-shattering".

Hey marionette, can you give us the link again? I couldn't get there and I'd like to read it... Thanks!

Kobra's dialogue is funnier if you read it out loud using the voice of Triumph, the Insult Comic Dog.

Sorry, I'm not sure why the link didn't work for me. It's http://zcultfm.com/~comic/weblog.php?w=42

I've also just started a Blogger blog in the vague hope I might get more response. I'm betting the link to that works fine. :>