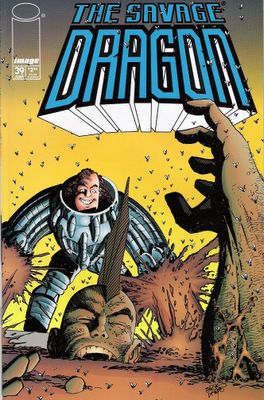 Here's a quality issue from Erik Larsen's long-running (some might say interminable) creator-owned comic book, The Savage Dragon, in which our hero battles the shit-spewing menace of... Dung! The great thing about this comic is, everybody has had diarrhea, so we can all relate to Dragon's predicament in this issue. In a sense, mankind has always battled Dung, and always will, so it works on a Joseph Campbell kind of level.

Where, I wonder, does the poo for Dung's arm-mounted shit-cannons come from? My guess is that Dung actually draws from an unlimited supply of extra-dimensional shit, or the shit-cannons pipe directly into his colon and he has a mutant ability to produce mass quantities of poo. If it were me, I'd get my own fetish site and sell my services to coprophagia nuts, but Dung chooses to use his power for evil. Bad call, Dung!

You know, this brings up a recurring motif in comics: the super powers a person gets pretty much dictate whether they're going to be a hero or a villain. Don't get me wrong, there are plenty of generic super powers that could go either way, like super-strength or flight. But no hero is going to have shit-cannons. You're destined to be a bad guy if your powers involve poo, or raising the dead, or kissing people and turning them into monsters, or melting people's face with your hands... Those are bad powers, and even if you're a nice guy, if you wake up with the ability to boil people's blood, you should just resign yourself to a life of crime or lab work.

Anyway, this issue. I'm sure it seemed like an outrageous idea at the time (1997) but reading this today, I'm struck by how juvenille the whole thing is. Yes, that may seem a strange and redundant criticism to level at The Savage Dragon, but there it is. In this issue, Dragon has his back walked on by a Chinese girl in a thong, gets a chesty blonde drunk and takes her home to have sex with her, and ends up fighting Dung and a monster whose name I can't be bothered to look up, which spoils his amorous plans. He defeats Dung and the monster by, well, see this panel below: 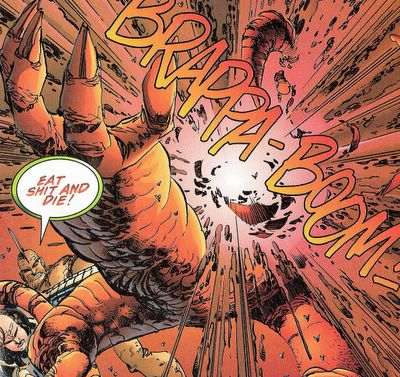 That's right: "Eat shit and die!" You get the feeling that Larsen wrote the entire comic around that one line.

This issue features a bonus pin-up of She-Dragon, a female character Larsen portrays as a stupid, psychotic bitch, and a Marvel Universe-style entry for Dart, a female character who dies in a horrible way in The Savage Dragon #112 (I think). Paging Gail Simone!

All in all, another shameless foray into the adolescent world of The Dragon. I don't know what it says about me that I have like, fifty issues of this series... But I'm not alone: this very issue features letters from Olav Beemer and Augie De Blieck!
Posted by David Campbell at 2:49 AM

Actually, Dart had her legs blown off in the #40s of Savage Dragon and THEN an alternate universe counterpart Dart had her head punched off by Mako in issue #112. Thankfully, Dart's niece looks EXACTLY like her, so she took over as the new, grimmer and grittier Dart.

I stand corrected. Thanks Dan!

Fun point of trivia: That chesty blonde drunk is meant to be Sue Storm.

Another fun point of trivia: Dung's alter ego name was "David Peters". Another lame shot across the bow from the Image founder in the (mostly one-sided) war of words between Erik and Peter David.

I remember a gag Peter David did in Hulk, where Betty Banner tells the Hulk that she has a great new disguise for him so he could go out without being recognized. She pulls out this green helmet with a fin on it that looks awfully familiar. The (intelligent at the time) Hulk looks at her funny and tells her that nobody would be fooled, they'd just say, "Hey, it's the Hulk with a fin on his head." Which is exactly what I thought every time I saw the Savage Dragon.

ghostman: LOL! Now that’s how you make you fun of your rival comic writer. :-)