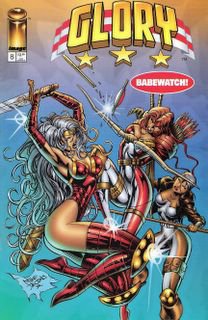 (Before we start, can I just draw your attention to Glory's knee pads on the cover? Holy crap, those are serious knee pads. She looks like a Cimmerian goalie.)

One of the things I liked about Image Comics in the Nineties was that damn near every comic was printed in color on beautiful glossy paper. DC and Marvel busted out the expensive stock for special projects, but Image rocked that shit every time. Every month Image Comics offered, in glorious shiny color, the work of superstar artists who had made names for themselves working on newsprint books. For a little more money than a Marvel or DC book you could get a slick, well-produced Jim Lee comic book written by somebody’s cousin starring… well, who cares? Fuckin’ Jim Lee is drawing that bad boy!

Conversely, one of the things I hated about Image Comics in the Nineties was that damn near every comic was printed in color on beautiful glossy paper -- even the shitty ones.

I might have not felt stupid buying an issue of, say, The Deadly Duo if it was printed on cheap newsprint, but I felt like an idiot after shelling out three bucks on a handsomely printed issue of Team Youngblood with a holo cover. I have a hard time throwing away something that cost me three bucks – I’m of Scottish descent – and as a consequence, I have a tragic quantity of mid 90’s Image Comics taking up room and reminding me of past folly, reminding me of that one hot Wednesday in the summer of 1995 when I wanted a comic book and damn it, I didn’t care which one!

Anyway, the point I’m trying to make is that Glory #8 is a shitty comic book with high production values - except for the art, which sucks, and the writing, which sucks, too. Glory #8 is printed on nice paper, anyway, and has the virtue of featuring Sex Changed Superheroes (hi Google users!), thus earning it a spot in Dude Looks Like a LadyWeek!

This issue of Glory is the gripping finale of a saga that started in Youngblood #3, a gender-swapping fantasy that literally had to be called… wait for it… here it comes…

Typing that makes me want to stab somebody other than myself. Let me try it again: Babewatch. Yep, a homicidal rage is welling up inside me like bile. Remove all pets from the area. This comic is so stupid it makes me deadly to pets!

Here’s the plot: a muumuu wearing villainess named Diabolique uses Wacky Magic to turn all the Youngblood studs into women and puts them under her hypnotic spell. The all-female, all-brainwashed Youngblood beats up Glory, the super-powered princess from the all-female island of Amazonia (seriously), until she teams up with all your favorite Youngblood heroines (like, um… that one girl, the one with the breasts and the armor) to kick ass. They stop Diabolique’s evil plan to attack Amazonia, change the Youngblood heroes back into puking men, and Wonde—excuse me, Glory is happy. The end.

Here’s a good shot of the gender-warping kookiness that is Babewatch! 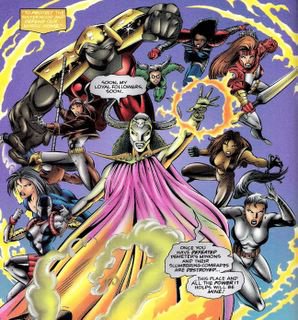 See, I told you Diabolique wore a muumuu. Seriously, what is she wearing? Does it have a fan under there to make it blow about? It’s like this huge Shelly-Winters-in-Palm-Springs thing. Not flattering at all.

One of the problems of this comic, aside from it sucking, is that unless you’re a huge Youngblood/Extreme fan, it’s kind of hard to figure out who these people even are, let alone care that they’ve been turned into women. I mean, if Batman got turned into a woman, that would be something, because you know something about Batman and how he might react and wouldn’t that be amusing. But if Cougar or Troll get turned into women, I’m just happy that I get their names straight.

Fortunately it’s easy to keep track of everyone because Glory follows the time-honored tradition of naming your opponent as you punch them: 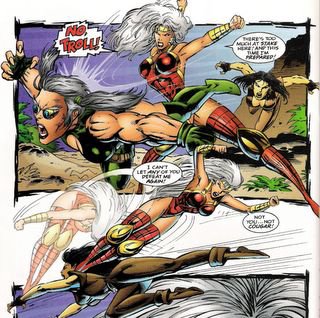 Glory #8 – not a good comic. The Youngblood heroes get turned into women solely to make interesting opponents and to show some ass. The tired, hackneyed story is matched only by the rushed and joyless art. It remains a solid entry into Dude Looks Like a Lady Week, even if I do feel a little sick now… 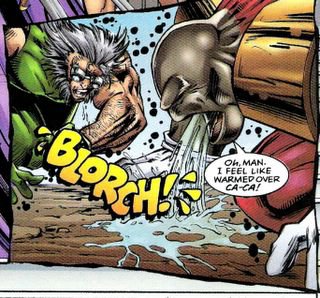 Posted by David Campbell at 5:39 PM

Remember when Mike Deodato was hired to mimic Liefeld? And you realized that he was doing a Liefeld better than Liefeld?

Just don't ask what those knee pads are used for. Or why they have to be polished so often. ;)

Re: The puking shot.

Someone needs to educate Wolverine and the Thing in the field of colour. Their new looks are terrible!

I feel like warmed over... that has to be the stupidest comic I've ever seen. Glad I didn't buy Image. Babe watch ha ha ha!

So, these were the Alan Moore issues, right?

"Babewatch." Oh, 1990s comics. At least you had the guts to be openly stupid rather than pretending to be intelligent like Whatever Crisis. Female Badrock was NOT something I needed to see, though. Liefield's women are quite disturbing enough as it is.

By the way, I was able to remember who the midget Wolverine ripoff Troll was because he appeared in Alan Moore's incredibly Airwolf "Judgement Day," where it was revealed that he was an actual troll.

Girly!Troll's pigtails are a riot, at least.

That cover...that cover. I weep for my eyes.

Why does the dudelady (Knight Strike?) look like the RCA dog? "Aroo?"

Adrian: Not only that, but a troll with Blue Skin who had to put on a lot of makeup all day.

Diehard over there was a robot. Now he is a girl robot.

I now remember why 95 was the year my teen-angsty and snobbish "VERTIGO Only" attitude took over.

THe presence of Troll has made this entire entry worthy of awesomness. I firmly believe that the word of Troll must be spread through the land. I've followed his path ever since the guy who ran the comic book store gave away all the copies of the Troll series he had just to get them out of the store. It just goes to show that ALL religious books that are legitmate (NOT Scientology), have free copies of their literature.

Actually, this book is incredibly rare for the mere fact that it has a cover by Mike Deodato on which he actually drew somebody's feet!

Aaah Rob Liefeld and Youngblood. I remember before Youngblood ever came out, Liefeld had this interview in Comics Scene talking about all the amazing plots and stuff he was going to put in the series --and then the first issue came out, it was two unrelated, unresolved fight scenes and that was that.

Babewatch... stupid argument... augmented babes... emphasis in boobs and not in feet... now I understand where it all comes from (did youngblood also last till issue fourteen?)

No, Alan Moore wasn't writing the book yet. Heck, I don't think Terry Moore was writing it yet, either, unless I'm confusing him for another series. It was likely Eric Stephenson. Maybe.

He wrote the greatly underrated NEW MEN at the time, with art by the insanely young and highly talented Todd Nauck. Nauck had the habit of hiding MST3K references into each issue, as a bonus.

Martin -- that COMICS SCENE interview is the proof that Rob had some decent ideas for YOUNGBLOOD, some of which were really new for comics and timely to this day. Sadly, none of them showed up in the comic.

Yeah, one of these days I'll remember that sarcasm doesn't translate without smileys...and it will be a cold day in hell before I do a smiley, or a winkie, or a wet willy or whatever.

Just to let you know Dave, your “ahh ahh dude looks like a lady.” mp3 prompted me to download the whole song from the Internet and hearing it nonstop while reading your entries for this week.

And now it keeps playing in my head for all time.

No matter if I´m awake or asleep. I keep hummimg the song and suddenly shouting out “ahh ahh dude looks like a lady.” much to the initial surprise ( and now mountimg fear ) of all the family members.

Damn you Dave you ruined my life ! And some day when you least expect it and suddenly find yourself on a lonely deserted road in Germany.....I will be there.


Apart from this I´ve been a longtime reader and have enjoyed almost every entry ( not the ones about the issues I own ). I like to read your blog to remind myself why I ever started reading comics. Sometimes I think you are the last sane person who is left in the world.

How messed up is that ?

I think in Bavaria that is a real word.

That's not surprising, given that he's a Rob Liefield character.

Oddly, it's actually spelled "muumuu." It's Hawaiian. They like extra vowels.

I cannot believe how many posts it took to have someone correct the spelling of "muumuu"!!!

Muumuu - got it. I'll change that.

And greetings to my German friend - sorry about planting Aerosmith in your head.

I so want to see a Terry Moore/Rob Liefeld collaboration.

Andy - Rob didn't draw it. Terry wrote it for an issue or two. It might have been SUPREMA, now that I think of it.

Unknown said...
This comment has been removed by a blog administrator.
2:16 PM