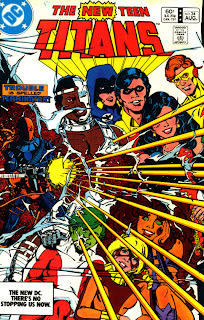 Forget about Trigon, the Wildebeest, and the Team Titans - The Judas Contract is the definitive New Teen Titans plot, the equivalent of the X-Men's Death of Phoenix storyline.

This particular issue, New Teen Titans #34, was the big reveal, the "holy shit!" issue where readers learned the shocking truth about Terra, the annoying buck-toothed heroine with the Prince Valiant haircut who was inducted into the ranks of the Titans - she was Amish! No, wait - she was a traitor, a mole planted on the Titans' by their mortal enemy Deathstroke the Terminator.

I love this storyline because I got to experience it in real time as it unfolded every month. I’ve already extolled the virtues of Marv Wolfman and George Perez’s densely packed, more superhero for your buck run on Titans and how the colorful and shiny cast of DC heroes was a perfect counter-balance to all the Marvel books I was getting at the time. I got hooked on the issue where the young heroes battle giant animated Hindu statues in the snow and had to get every issue thereafter.

Terra Markov was a brash heroine with a boulder/chip on her shoulder who could telekinetically manipulate rock and earth – the perfect character for artist George Perez, the master of drawing rubble. For several issues she bitched and whined and tried to worm her way on to the Titans roster, until she finally proves herself in a (staged) battle with Deathstroke in this issue. 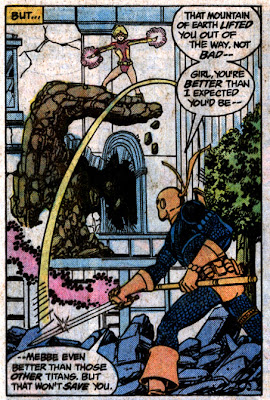 I dig Terra's powers - they look great - but I'm not a huge fan of the character herself, and this issue just confirmed that Young Dave was right to not like her! Vindicated!

Anyway, after seemingly vanquishing Deathstroker (that's a dumb pun, not a typo), the rest of the Titans decide to invite Terra to join their special club. 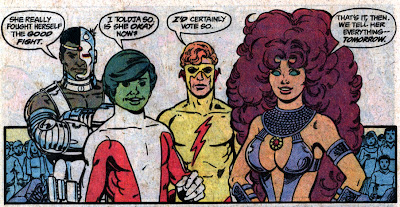 The Titans were perhaps not the most sensitive peer group. Terra’s hard luck story about being raised by terrorists falls on deaf ears among the team, who each have traumatic histories that would put most people in therapy. Here they blow off Terra’s attempts at inducing sympathy: 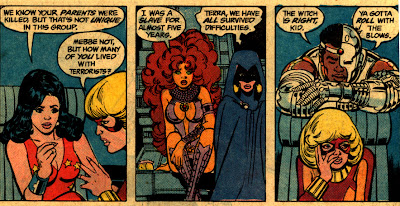 “Big fucking deal, girl. I got all burnt and exploded and now look at me – I’m a goddamn robot. I’m all hideous and shit.”

“I sympathize, Terra, but my father is a demon lord and I occasionally grow extra eyes on my forehead and try to kill my friends. Beat that.”

“I’m a total fox, but I have like, twenty different origins and I’m in love with a red-haired loser with a beard. A beard.”

“I was a slave for years and I have no pupils. I also trip over my hair all the damn time. Then again, I'm stacked.”

“I have green skin and hair and have to wear this red and white outfit. Plus: no penis."

“Two Face killed my parents and I wear bikini bottoms. And I grew up in a cave full of goddamn bats and a psycho drill sergeant surrogate father who regularly thrust me into combat unarmed against people with guns. Every other night I got knocked out or tied up or strapped to a giant cue ball. So I ain’t trying to hear that shit you're talking.”

Nope, not a lot of empathy for the buck-toothed rock girl in Titans Tower.

The other thing that this issue had going for it was Deathstroke the Terminator, one of the

coolest villains ever, a man who dresses in blue and orange and somehow makes it work; a man with perfectly good eyesight who covers up one eye because it wouldn't be fair to his opponents if he used two; a man who sports a DC Beard (see Green Arrow, Warlord) when he's not in costume; a man with not one but three kick-ass names (Deathstroke/The Terminator/Slade); a man who uses 90% of his brain at all times because it wouldn't be sporting to use the full 100%. He is perhaps the most bad-ass villain in the DC Universe this side of Kobra - and he knows it.

At this point in the Titans Timeline he is just referred to as The Terminator. I'm not sure where he picked up the "Deathstroke" handle. Prison? Don't judge, man, we all do what we have to in order to survive.

Anyway, it turns out Deathstroke is the chief architect behind the whole Judas Contract plot, which doesn't really pan out in the end, but must have seemed like a good idea at the time. I'm just glad it was Deathstroke and not somebody lame like Clock King. I won't even mention his prison name.

Man, DC was firing on all cylinders in the Eighties. If you'll notice in the barcode box on the cover, they attempted a rebranding. They were "The New DC" and there was "no stopping them now!" I'm glad they settled on that slogan as opposed to some of their other attempts at hip, edgy branding:

Yeah, maybe a little too agressive...

I just wanted to say that.

The sound Kang makes when he's on the toilet. FUTURE POO IS AIRWOLF.

I don't think Kid Flash is Republican, as much as he is a "Scoop" Jackson Democrat, as shown in several Gerry Conway issues of the original series and more full outlined in my fanfic-slash-polemic, Kid Flash Is the Bestest Character Ever and DC Should Totally Let We Write Him Instead of Being Stupid Breadheads.

Actually, Deathstroke _is_ blind in one eye. His now-ex-wife tried shooting him in the back of the head when he nearly got their son killed.

He's inhumanly fast, so he managed to almost dodge it, but the bullet destroyed one of his eyes.

And I believe Deathstroke is the name he adopted when he became a paid assassin.

AJB, I stand corrected. The rest of you guys are big turds.

Wow. That's the very same issue of TT that I picked up. Hawkman was totally usesless in that issue and Dr. Light was sitll comic relief instead of Rapeston Rapington. I was indeed hooked

Never considered how fucked up the Titan's origins were until they came out with that 4 issue mini where they went camping in the Grand Canyon. Geez, turned into a hideous robot-frankenstein by your dad. Getting tortured and sold as a sex slave by your own sister. Having your party girl mom get busy with a demon from another dimension. And he had antlers. And being green! Everyone knows that isn't easy.

How can you leave out the best part? Where we find out that Deathstroke is possibly fucking Terra?

I think I was about two issues behind this one when I got into the Titans, but yeah, the whole Judas Contract thing utterly rocked. I was pleased that it's awesomeness was recognized by the creators of the TT cartoon a few years ago... though rather less than pleased with the results.

Judas Contract rocks the Casbah and Salade von Deathstroke del Terminator is da, as the kids say, shiz-net. Do kids say that? If they do, they're idiots.

“Two Face killed my parents and I wear bikini bottoms. And I grew up in a cave full of goddamn bats and a psycho drill sergeant surrogate father who regularly thrust me into combat unarmed against people with guns. Every other night I got knocked out or tied up or strapped to a giant cue ball. So I ain’t trying to hear that shit you're talking.”

Plus, the psycho made me eat rats and called me a retard and said "goddamn" a lot...

Love me some 80s Titans. I had such a crush on Starfire back then. (Hey, I was 14) Anybody remember the TT special with the marrage of Donna Troy? Huge superhero wedding, lots of interpersonal stuff, and no supervillian attack. Really, not one supervillian. Even to my teenage mind it was somehow incredibely cool that the writers choose to avoid that overdone trope and just show the wedding.

It's okay Joshua... I had a crush on Halo in Batman and the Outsiders...

Which reminds me... How do you stand on some 80s Outsiders? Which featured Kobra as a villian?

Man, they just don't make comics like this anymore. Thanks for the very welcome trip down nostalgia lane :)

I only hope the DTV Judas Contract is half as good as the comics were.

Take it and run.

I always wondered why Kid Flash seemed like the only one who didn't have a horribly tragic background.

But that was before I knew he was a Republican!

Kid Flash had a shit-load of angst back then, including:

*I have a crush on Raven but she keeps pushing me away.

*If I use my powers, they KILL ME. Seriously, just running a little bit feels like Black Lightning is attacking my penis!

Remember, he quit the Titans the same moment he revealed his identity to Terra.

The Teen Titans cartoon was the only example of me giving in to the "Oh no; my childhood has been raped!" thing that so many other people go off about when something they loved has been adapted/mutilated.
I definitely loved me some New Teen Titans in the 80s, up untl they pissed me off and went direct sales, leaving those of us who couldn't afford a subscription and didn't have a comic book store within 200 miles with the sloppy seconds reprints in "Tales of the Teen Titans."
But I'm not bitter.
Seriously, I'm not. In fact, I just bought a Judas Contract TPB and was pleased to see that it lived up to the nostalgia.
Can't wait for the DTV movie.

Love me some 80's Titans. Thanks for bringing me back to the days when I had to dig through the grocery store magazine rack for my monthly dose of Titans. The Judas Contract rocked! (A lot better than Danny Chase and the Wildabeast saga that soon followed)

It might have raped your childhood, but it made my kids childhood memory list. He started watching it when he was 4 and is still a gigantic fan. Frankly, compared to most childrens television, the animated Titans were a breath of fresh air. The toon cleaned up a great deal of Marv Wolfman baggage, and streamlined so many things about what makes the characters work.

One of the things I hate most in the world of comics? The way Marv Wolfman used to have everybody say 'mebbe.' 'Mebbe.' The sight of the word angers me greatly. It led me to hate the Judas Contract as a whole because he had everybody in the fuckin book use it. I still hate it. I will forever hate it.

Ha! Goody, I was just about to point that out! I'd forgotten about Wolfman's "mebbe"s. It didn't make me hate the New Teen Titans, but it did make me wonder if Marv even knew the word was spelled "maybe."

He also used the word "certainly" a whole lot.

He was always called "Deathstroke the Terminator." But after the "Terminator" movie came out (1984, I think?) they just started calling him Deathstroke to avoid legal issues. Not that they wouldn't have won (prior art and all) but it just seemed like you were poking the bear for no good reason.

Well, Dave, that's because blue and orange are what are called complimentary colors (if you watch enough TLC you pick up these things). Just look at the New York Islanders...
Man, imagine if Deathstroke played for the Islanders...