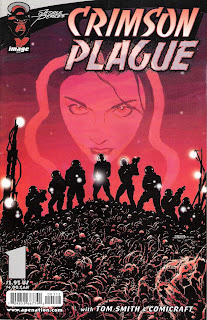 I have to be careful because my fingers find themselves wanting to type "Crimson Plaque," which would be a wholely different but equally disturbing comic. Floss and brush, kids! You don't want crimson plaque or ochre tartar, that's some nasty shit.

This comic, part of the creator-owned Gorilla Comics imprint published by Image Comics, only made it two issues, but the first issue is like, 64 pages for only a couple of bucks. I wonder how they made money off that one. George Perez, arguably one of the greatest comic book artists of ALL TIME, wrote and drew this ambitious but unwieldy tale of two women - DiNA Simmons (acid blood, red streaks in hair) and Shannon Lower (acid tongue, no pants on butt). One of the things that makes Crimson Plague noteworthy, aside from all the melting flesh and stuff, is that all the characters in the comic were modelled after real people that George Perez knows. This is both a good and bad thing, as we'll discuss shortly.

It's sort of difficult at first to figure out who the main characters are and what the main plot of Crimson Plague actually is, but after repeated readings I think I've got it figured out. Shannon Lower and a bunch of ragtag space marine types are dispatched to a lunar penal colony to rescue employees of the mutli-planetary corporation EcoTech from rebellious prisoner/miners. When they arrive, they find no survivors - just lots and lots of red goo that used to be human beings.

The shit is everywhere; it'll take more than a couple of Swiffers and a trash bag to clean this mess up. 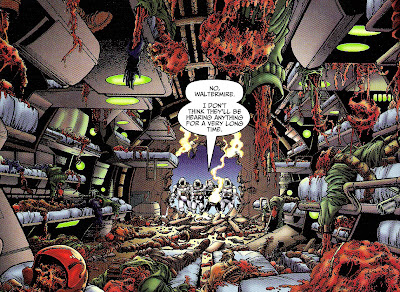 Man, what a mess.

It turns out that most everyone has been killed after exposure to the acid blood of DiNA: Simmons, a foxy woman with a seriously dangerous physiology. Anything her blood touches dissolves into the aforementioned goo while screaming, "GAAAHHH! HELP MEEE!!!" Seriously, her blood is so nasty that the slightest drop will totally kill you within seconds in the most gruesome way possible. Beat that, Rage Virus!

Perez is famous for his ridiculously detailed art and Crimson Plague is no exception. He seems to really enjoy drawing people dissolving into red goo. Here's some poor mulleted bastard who makes the mistake of stabbing DiNA: Simmons in the gut. Bad call, dude: 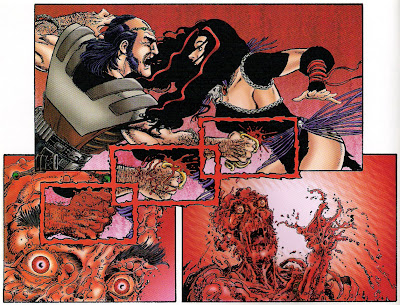 So DiNA: Simmons (no idea why her name is spelled like that) is sort of the villain of the piece, a combo of Alien and Species. Shannon Lower is the protagonist, I guess, but that's only really evident in the second and final issue. She kind of gets lost in the crowd in the first issue, which is full to the point of gagging with minor characters. Since she gets about as much page space as everybody else, it's tough to figure out that she's supposed to be the focus of Perez's story. She ends up being the sole survivor when the Colonial Marines, er, I mean EcoTech soldiers she's with get slimed by DiNA.

Now that I think about it, the tip-off that Shannon is the main character is her introductory panel, in which she appears in her underwear. There's an alarm going off on her ship and she's got no time for pants! Pants? "Pants, HELL!"

I admire her spirit. There are some times when you just can't be bothered with trousers, like during an earthquake or at the swimming pool. I'm going to try that: next time the mail comes I'm just marching down there in my boxer briefs because damn it, there's a Bank of America bill and a J. Crew catalog just sitting out there exposed in my mail box! "Pants, hell! I've got to get that damn mail!"

I would have liked to have seen more Shannon in her underwear and more crimson goo, but alas, Crimson Plague never made it to issue three, because Gorilla Comics folded as quickly as they set up shop. Perez clearly had big plans for the series, because the first jumbo size issue is absolutely packed with exposition and characters. It's one big steaming info dump, really, with not a lot of narrative momentum. One gets the feeling that Perez would have hit his storytelling stride after a few issues, but we'll never know. As is, the first issue in particular is a busy mess, jumping around in time and location with abandon. A few narrative captions would have smoothed things out and made it an easier read.

I mentioned earlier that Perez based all of his characters on people in his life. Dina Simmons and Shannon Lower are real people, presumably without acid blood. That may explain why even the most incidental character gets a name in the book, so Perez can say, "See, Bob? You're the space janitor Max Mopup on page 13. You get killed on page 14, though. Sorry."

Perez is a fantastic artist, so all his characters look like real people instead of the usual default Square Jawed Guy template we get in many comics by lesser talents. The problem is, Perez is not as good of a casting director as he is an artist. Some of the characters just don't look like they fit their role.

It's like when you watch a low budget Canadian syndicated TV show and the cast just doesn't look right. You know what I mean? You can just tell - the guy on the screen doesn't look like an FBI agent or an immortal warrior, he looks like a truck driver. I just couldn't get past the "miscasting" in Crimson Plague. Lower and Simmons fit the bill, but some of the other characters just look sort of... normal. You know you're not looking at a galactic president, you're looking at the librarian at George Perez's local library.

P.S. I forgot to mention that I don't actually own Crimson Plague - Ian Brill lent them to me like, TWO YEARS AGO and I never gave them back. Sorry Ian! You can have them back now...
Posted by David Campbell at 8:17 AM

I've met George Perez's attack droid and that looks NOTHING like him.

I'm George Perez's stalker and that looks nothing like me!

I know where you live Campbell!

(not really, this as joke, in these dangerous, litigious times I feel I must make that perfectly clear)

Well, yeah, DiNA: = DNA, but what's with the colon? And why give a character such a painfully stupid first name with a normal family name? If you're going to go the stupid route with names, go all the way, like with Zap Rowsdower. Now THERE'S a dumb name I can get behind!

...or Max Mopup. That's a kick ass name right there.

I remember when this book first launched with Event comics before this re-launch; and the whole tag line was that the plague came around once a month (nudge, nudge). It was just gross.

Hmmm, space marines, female protagonist, acid blood ... where did he possibly come up with these plot elements?!

You don't need to wonder how the series would turn out. Just rent "Aliens" and change a few of the details.

I think his accountant is Julius Schwartz. I hope he didn't get red-blobbed.

I know, Tim but I like George Perez so I couldn't be too mean. I'm just a big softy.

I like George Perez enough to check out anything he draws, but Crimson Plague is one of the worst-written comics I've come across.

You know what are some enjoyable, underrated Perez comics? CrossGen Chronicles. He drew the hell out of those, and they looked awesome. You can probably get them in the quarter bins now, and they are well-worth the search. Perez drew issues 2-4, and maybe one other.

As I recall, there was also some sort of mysterious superhero/warrior type running around, who seemed not to have anything to do with anything. I always wondered how many issues it would have taken before that plotline connected to anything.

From here on out, I am only interested in what is real. Real people, real feelings, that's it, that's all I'm interested in.~
Russell Hammond Quote from the movie Almost Famous

"but the first issue is like, 64 pages for only a couple of bucks. I wonder how they made money off that one."

Crucially they didn't. That's why Gorilla lasted approximately no time, they lost money hand over fist.

Right- GP didn't take into account the doubled printing costs for a dbl-sized issue, and lost lots of money on the first issue, even tho' it sold moderately well.

I felt guilty about buying this, because I'll buy almost anything with Perez art, but I just wasn't feeling the story at all. Turns out I didn't have to worry about it.

May be off-topic, but just caught the interview of you up at sitemeter.com. Very nice, Mr. Campbell. You're a classy blogger.

Gorilla was supposed to be funded by an internet startup- eHero.com- but unfortunately the comics premiered just as the Internet bubble burst, so the creators had to pay out of their own pocket. IIRC Mark Waid actually helped pay for some of the other creators' books, nice guy that he is.

It's a real shame it didn't get off the ground like it had planned, because a lot of the titles looked really good.

I liked Shockrockets too--at least Kurt Busiek and Stuart Immonen got to finish their first storyline (which apparently was reprinted by Dark Horse, according to Wiki), unlike most of the Gorilla titles. They definitely had some quality creators in their lineup, though.

I remember when this book first launched with Event comics before this re-launch; and the whole tag line was that the plague came around once a month (nudge, nudge). It was just gross.

It gets worse. Even nowadays, the focal point of interviews about the series has Perez mostly dwelling on the fact that she has goopifying acid blood and, phrasing it delicately, is a fertile woman. So that was supposed to be the big source of suspense - when will it be 'that time of the month' and what will happen. It's just... puerile, and I found it disappointing. Perez is such a great artist that I was disappointed he was dwelling on such a stupid, sick concept.

Her name was based on "DNA" because she was genetically altered as a fetus. (An explanation for non-forthcoming future issues)

George's idea was simply way, er, WAY ahead of its time.

And speaking of George's writing, his issues of Wonderwoman back in the eighties were amazing, for anyone who hasn't read them.