Man or Mouse, None Escape Doom!

Conventional methods have not allowed me to capture/kill the mouse that craps on our counter top every night, so I have enlisted the aid of Victor Von Doom. I pray the price of his aid is not too steep, but whatever the cost THIS MOUSE MUST DIE. 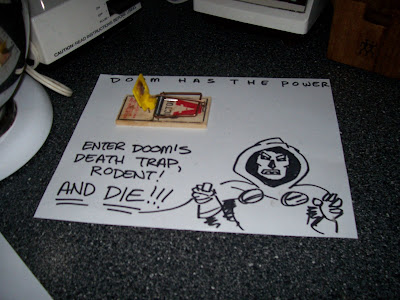 We had a family of mice living near our house eating the garbage; they were cute. A Papa and Mama Mouse. and several baby mice.

I deployed about 5 mice traps with peanut butter around their holes.

I was like Nuked powered sentinals flying toward Magento's Mutant Nation.....

It was pure shock and awe and convinent when disposing the evidence being near the garbage!

I agree with tigran--peanut butter's worked well for bait in my experience too, and more traps just improve your chances. Mice tend to hug walls and stay near cover, so I'd avoid putting your traps out in the open. And if you have a built-in dishwasher, I'd put a trap near it if there's a gap between the bottom panel and the cabinet. Mice tend to hide under them because they're safe there, plus they like to burrow into the insulation.

Now you've got me wanting to build a tiny little Murderworld for the ants on the kitchen floor.

That is so cute.

glue traps. work every time in my experience.

Please tell me the trap makes a SFLANG! noise when it springs.

It'll probably work, but at what price? Your kitchen now belongs to Doom.

But when the mouse has its face crushed in the trap, it will just build a little mousy iron mask and armor and take its vengeance.

you couldn't use a humane trap?

i thought more of you, sir.

Humane traps? Bah! Doom cares nothing for your pitiful humane traps! Doom will put the rodent miscreant's head on a tiny pike, that it may serve as an example to all of its kind!

"It'll probably work, but at what price? Your kitchen now belongs to Doom. "

Eh, I doubt it. Bringing Doctor Doom into a fight like this inevitably leads to years of mousey back-and-forth.

I think you would have been better off hiring Silver Sable and the Wild Pack to take out the mouse. Expensive, but at least you would know the price up front, and could be sure the contract would be carried out.

See now you'll end up up killing the mouse, and it will just turn out to be a mousebot.

we're coming for you.

we will not let that mouse be unavenged.

This seems like the perfect opportuinity for some science cats. Top 10 yeah!

C'mon Dave, you know this has to lead in to a post about Neopolis' finest!

I see two flaws with this plan:

1. Any of the Furtastic Four could easily elude or escape such a trap.

2. By publicly posting your intentions to go mouse hunting, you may have earned the enmity of The Disney Corporation.

Gotta say, though, that I'm loving the idea of a tiny Murderworld. Is that what those scientists do all day?

Um... you brought in the guy that launched the Baxter Building into space to get rid of that accursed Richards? Better grab a couple change of address cards while you can.

moistened cottonballs are the best when it comes to mousetrap bait.

having victor von doom on your side definitely helps too.

man. There are too many funny comments for me to bother.

If Doom got hungry, would he annex your jar of peanut butter in the name of Doom?

Speaking of peanut butter, I've noticed when catching mice that when you put a little dab of it on the trap, it gets them. The trick is that it gets them the next day. Don't put more on after the mouse licks the original glop off, he'll come back and go to work on the trap and set it off.

I won't kill any creature, if I can at all avoid doing so.

(Yup. I catch and release almost all insects I find in the house too)

I had flying squirrels getting into the house and making nests in between the floors.

So, I bought a HUMANE trap and cut an access panel in the ceiling of the TV room.

Then, with the ULTIMATE bait of:

Ritz cracker, with Peanut Butter and bird seed all over it (making sure to push some big seeds deep into the P.B.) I then spread a copious amount of PB on the BOTTOM of the cracker (so the little rodents couldn't just walk off with the damned thing),placed it on the trap sensor-plate, placed the trap between floors, re-set the panel and waited.

I was catching one or two every night for over a week (no. It wasn't the same one).

They tended to come out around 3am, so I'd take them for a drive deep into the woods and let them free where no one else lived.

I made sure to let them ALL free from the exact same location, so they could follow the scent of their brethren and reunite later.

Nothing quite like sitting out under the stars, deep in the woods at 3am and watching this little guy go from tree to tree to get to the tip of the tree canopies... and then...
VOOM!

There MUST be a field somewhere near where you live Dave.

The mice can't help it if they want to be near you.

Don't hold it against them.
Be a pal.

I say we take off and nuke the entire site from orbit. It's the only way to be sure.

I, Prince Zorba, younger brother of Rudolfo, will free the oppressed mice of your kitchen and return your culinary preparation center to the rule of Latveria's true ruling family!

Glue traps only work if you find the idea of having to crush a little mousie's head because it's stuck in the trap and squealing louder than you thought a little mousie could squeal. I promise you, that will make reading Punisher comics to your daughter seem downright benign in comparison. And never read Mouse Guard to her or she will never look at you the same way after this.

Good luck ridding yourself of these uninvited guests. They have no bones, you know which is creepy and cool and allows them to get out of most "humane" traps. Snap their little mousie necks, Dave. It's the only way.

Well, they DO have bones.

They can just distend their joints.

Get a habitrail, set it up with cool Kirby background images, slap a Mister Miracle cape on the mouse, name it Scott Free and watch it try to escape from the pits of APOKOLYPSE!

Your daughters will love you for it.

And then you'll want a female one to name Barda.

The clear habitrail tube can be the Boom-Tube!

Oh, you KNOW you want to now!

We once tried the peanut-butter-laced traps for the mice in the apartment, and managed to attract the colony of ants that had been lying dormant in the walls. There really is nothing quite like waking up to the sight of a hundred tiny insects going to town on a peanut-butter-crusted rodent corpse. My only regret about the situation is that the roaches didn't come back to take care of the ants, in classic "old lady swallows fly" style - I really wanted to have that gorilla munching on the alligator that came to get the dog that came to swallow the cat that came to devour the frogs that came to eat the roaches...etc.

Ripley, I know this is an emotional moment, but let's not make snap judgments. First, Dave's house has a substantial dollar value attached to it--and this is clearly an important species we're dealing with here. We can't just arbitrarily exterminate them.

Ripley said...
I say we take off and nuke the entire site from orbit. It's the only way to be sure.

Dave, you're killing us! Did Doom destroy that infernal rodent? And I'm sure that is a Doombot. Such trifles are surely beneath the notice of the real Doom.

Doom's been pretty needy since he got back from Hell, actually. He would totally allow Mister Campbell to enlist him in a mouse-catching scheme.

I had a problem with mice (and a big rat) and I bought a product called the "rat zapper". It electrocutes the mice when they step on a metal plate inside the box. Instant death. Very satisfying and easy to clean up. I have been told that a walnut is the best bait. I used peanut butter.

Way to show that rat not only who's at the top of the food chain, but why, anonymous. The Rat Zapper is awesome, and I think even Doom himself could appreciate that kind of lethal ingenuity. "Cute and fuzzy" stops being a consideration as soon as vermin get in the house, especially around the food. If they wanted to live, they should have stayed outside.

Hmm. Still no update. Nor even a new post about something else. This does not bode well.

Now, it could just be that, his quarry having eluded him thus far, Dave has taken up a 24/7 sleepless vigil...

But there are other possibilities.

Perhaps Dave has learned the consequences of inviting Doom into his home.

Or, equally likely, perhaps Doom's hostile activities outside of Latveria have attracted the notice of local superheroes. If not the Furtastic Four, then I'm betting on either Monkey Joe (or his current replacement) or perhaps... just perhaps... everyone's favorite "mysterious magical white powder"-sniffing rodent... Mighty Mouse. Between the powder and having been out of work for nearly two decades, I could just see him flipping out and taking down both Doom and the man who brought the armored dictator into the house.

Could this be the work of the frypan-wielding rodent vigilante known only as "Jerry"??

saw ur blog it really kool!!
got anoder kool site for u check it out its really kool
check out d link d below!!

I'd like to build a little Murderworld for the members of the rodent family that are spammers.

Except that if they survive, they just get thrown back in with nastier robots.

And I'm also getting worried that Dave's plan to enlist Doom to kill the mouse has backfired horribly.

Sanctunsanctorumcomix said: "I had flying squirrels getting into the house and making nests in between the floors.

So, I bought a HUMANE trap and cut an access panel in the ceiling of the TV room."

Ceiling Flying Squirrel is watching you.

The coolest thing about the human traps is that you can easily rig them up so a few shotgun shells are struck as the door slams shut, blowing the whole thing up.

It works great with mole traps, if you're far enough away.

Er, that's meant to be "humane traps" in the post above...

It'd probably be cool the other way, too, though.

No post yet?
Leave us face it, the mouse got 'im. Obviously, it made Doom a better offer, he exposed it to some mutagen or other, and it all ended in tears when MonsterMouse put Dave's ass in a Human Trap.

Meantime, I've used the break to read through the entire Velvet Marauder archives (highly recommended, to those who haven't checked it out yet!) and now I'm wondering if maybe Dr. Quark, noticing that VM's blog is written by "Dave Campbell" and this one is written by "The Velvet Marauder," decided to bridge the dimensional gap.

He can do that you know. He's seen stuff. And done stuff. And stuff. And he's above the laws of any one universe.

The mouse escaped the wrath of Doom.

I see you have Dupont Corian counters. Mmmmmmmmmm. Nice.

David Campbell
Poet, dancer, and friend of animals everywhere. I currently write stuff for the good people at ArenaNet.