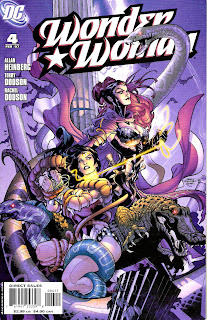 Relevant Content Week* rolls on with this look at the recently published Wonder Woman #4, from writer Allan Heinberg and the brother and sister art team of Terry and Rachel Dodson. I’m just kidding, they’re not brother and sister – the Dodsons are hot twin sisters who also pose for cheesecake calendars that are given away at auto parts stores. Seriously.**
I can tell you don’t believe me so let’s move on.
I am really not in love with the cover of this comic book. What's not to like, you ask? It's a classic Wonder Woman in bondage cover. It’s a classic convention of WW comics. Did you know that Wonder Woman has been tied up on a total of 573 comic book covers since her first appearance in 1941? I should know, I have 328 of them and I will not rest until I have the other 245 comics. It’s a thing with me. I’m not a big guy or anything, but stay out of my damn way if you have copy of Wonder Woman #219 because I will take that shit from you and strike you if you try to stop me! I will thrash you soundly about the shoulders with my cane!
Anyway, the cover.
I’ve seen better from the Dodson Twins. It’s difficult at a glance to tell what the hell’s going on. It feels too cluttered, busy. The focal figures of Wonder Woman, Circe, and an alligator from Fantasia are buried in a tangle of lines and washed out by the coloring. And the light blue tentacle or snake or whatever in the foreground is annoyingly distracting; it draws my eyes off balance and makes me crazy!
You see it, the blue tentacle? Now that I mentioned it you can’t stop looking at it, can you? The coloring really kills the cover for me. 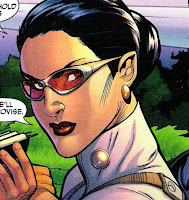 Let’s talk about the comic itself. DC rebooted Wonder Woman after the reality-punching Infinite Crisis crossover series, giving the title a facelift with shiny paper and big name creators. Unfortunately, the hot new Wonder Woman book went from monthly to bi-monthly in no time and DC is announcing that the creative roster is changing after the first storyline wraps up. I'm no publisher, but that cannot be the best way to build momentum on a book.
Okay, enough cattiness. The story and art for WW #4? I can’t complain, really.
I’ve long been a fan of the Dodsons’ art. They produce the kind of clean, classically American comic art that I enjoy. I think of their work as sort of a hybrid of Adam Hughes and John Byrne’s art, and I mean that as a compliment. 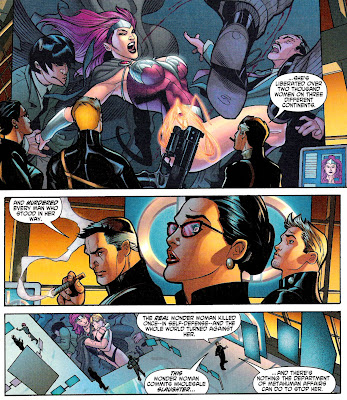 The kitchen sink plot begins one year after Wonder Woman handed over her tiara and lasso to Donna Troy in the aftermath of Infinite Crisis. Don’t ask, I don’t have the energy to explain. The de-powered agent Diana Prince of the Department of Metahuman Affairs teams up with the dreamy secret agent Nemesis (it's nice to see Nemesis getting some page space) and gets tangled up in a plot orchestrated by her arch-enemy, the sorceress Circe that involves an army of classic Wonder Woman villains like Silver Swan, The Cheetah, and Dr. Psycho. What, no love for Red Panzer?
Have I mentioned the white jumpsuit? 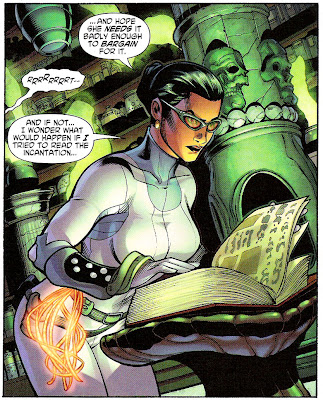 (Oh, re: the "RRRRRT" word balloon in the panel above? Nemesis has really bad gas and is just farting like a yak off-panel.)
In a wink to the now legendary “Emma Peel” era of Wonder Woman when she traded her star-spangled panties in for a sleek white jumpsuit, Agent Prince gets a sexed-up white body suit and cute tinted glasses. She looks fabulous.
Despite my irritation at the book’s lateness, I actually am kind of enjoying the story, which reminds me of Loeb and Lee’s Batman saga Hush in the way it gleefully crams all the signature elements – all the cool stuff – into one crazy storyline. It’s got the invisible jet, magic lassos, the spinning-transformation thing, the secret identity – everything. It truly feels like a reboot.
Now if DC could get their shit together and publish it every month, we might have something.
There you go! Another post about a comic that has been published this decade instead of some forgotten 2nd-rate book from the Eighties! Truly, Relevant Content Week is a thing of wonder.
*I'm using an ancient Hebrew calendar in which weeks last ten days, BTW.
**Gah! No! I’m kidding. Don’t sue me, Dodsons. They’re husband and wife, not hot Sapphic bikini model sisters. 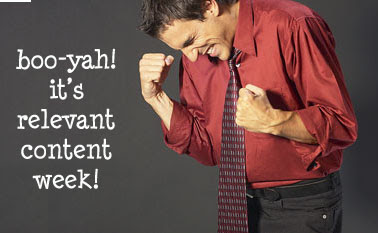 Posted by David Campbell at 2:50 PM

The Girl in Black said...

I loved Hush. Even if it was the kitchen sink.

Thanks for being so entertaining!

David, have you been following the recent "Planet Hulk"?

If so, can you explain it or comment on it, as part of this week's DLB feature?

Actually Dave, the even sadder news is that they aren't even going to let the Dodsons and Heinberg finish the story before they put in the new creative team. The cliffhanger in this one will be resolved in a special or annual or something down the road. How is that for screwing up the flow?

Also, your line about Nemesis passing gas off camera made me laugh so hard I plotzed.

This still isn't relevant it came out last week as well. Get with the program Dave. What about this week's comics. Damn it, just go back to reviewing Sheik appearances in Batman if this is how it's going to be.

Wonder Woman is a character I've always liked in priciple, but I've never been able to get into the vast majority of her stories. I enjoy her presence in JLA stories and the like (back when JLA was good) but have always skipped her own book.

Perhaps because each issue has taken so long to come out, I'm confused by the current state of things in WW.

Too confused to feel the need to make the jump.

Nice to hear that she still does the spinning thing, though.

Btw, I'm having a helluva time with your "visual verification" in Firefox v2.0.0.2. I have to switch to IE to see it, even after multiple reloads.

West, I use firefox 2.0.0.2 too and have no such problem. It might have to do with firefox's "adblock" add-on; it could be set up to not display the letter verification pictures. In that case, you need to unblock everything you (it) see (sees) in this page. It had happened to me in the past.

At least the end of #4 felt like an ending. I can live without the big punch-up wrap up.

Best thing: The return of the eagle breastplate.

Scariest things: Diana's buttocks in the first panel of page ten. It's as if they are reaching out to me. Like they want to crush me. It's almost like they're ... alive!

I like the Dodson's art for some of the same reasons. It's got all that I like about the Hughes/Cho art, but none of the bad storytelling and lack of backgrounds. I'd liek to see them teamed with a writer who could work monthly (see Spider-man/Black Cat)

Did the comic get a whole lot better from the first 2 issues? Here's the smart-aleck review of #1 I wrote that sums up why I didn't like it. One of these days I'm going to pick apart #2 and explain why it's a Bad Comic, not in terms of "Wonder Woman shouldn't act like that" and more in terms of "This comic has confusing panel flow and bad grammar." Add the perennial lateness and I stopped reading a long time ago.

I'm disappointed because I feel like it's trying to do a fresh, new start for the character by relying as heavily as possible on old continuity, which is kind of counterproductive. I'm also disappointed because Allan Heinberg is working on this rather than more Young Avengers, which was way cooler in a bunch of different ways.

I had never read or followed "Wonder Woman" other than reruns of the TV show when I was a kid, but I have enjoyed this new series as well. I'm trying to get my fiancee to try it as well. I too wish it had a more regular schedule, but at least DC is working on getting the comic out on a regular basis, even if that means fill-ins.

I have to say, the artist really needs to re-think these poses. In that "fight scene" panel you posted, it actually appears as though the woman has her legs spread wide apart, and the guy in the right side of the panel (who is a dwarf) is about to plunge his head into her hoo-haa, and it appears that this woman is a natural blonde.

So, I don't really believe it may have success.
mold remediation cost | car dealerships in buffalo ny | jamaican wedding